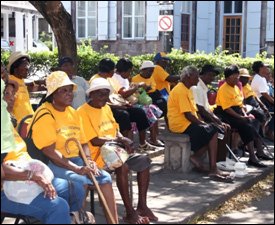 Minister of Social Development on Nevis Hon. Hensley Daniel said the Nevis Island Administration had taken the phenomenon of aging seriously and put measures in place which catered to the needs of the island’s senior citizens.

Mr. Daniel’s comment came when he delivered an address to herald in a month of activities on October 1st, to highlight the contributions of the elderly. The events will be hosted by the Department of Social Services, Senior Citizens Division under the theme “Towards a Society for all Ages”.

“We lead in the care of the aged “¦We have a Home Health Care Programme to care for the siick elderly. The workers move around in the community to provide quality care to the elderly who are at home. There is a programme to celebrate the milestone reached by seniors such as birthdays and anniversaries.

“The elderly receive concessions on prescription drugs and medical care. All persons 65 years and over receive free medical attention at the Alexandra Hospital and we have regular outreach programmes in Charlestown by the Red Cross, Butlers Health Centres on Mondays and by the Nelson Mandela Centre at the Flats on Wednesdays,” he said.

The seniors also organised their own recreational activities and exhibitions and sale of their work was a common happening.

Mr. Daniel said the activities were important to the elderly in keeping with the activity theory which suggested that if the elderly continued an active lifestyle of social interaction they would develop and maintain a sense of wellbeing or life satisfaction.

“These activities prevent social breakdown in old age. Old people benefit from a high self esteem and this often serves as an impetus for creativity and expression.

The Minister pointed to the results of a Caribbean Development Bank funded Poverty Assessment Survey which said that the elderly on Nevis were on par with the rest of the population.

He cited the finding as unusual and which underscored the time, resources and energy that had been committed to the care of the aged.

Mr. Daniel was of the view that the island’s elderly had a great deal of wisdom and they were highly respected and valued by the NIA.

He said the 2009 theme for the activities provided an opportunity to build youth/adult partnerships to ensure that the society continued to reproduce itself; that the social norms and values were passed on to succeeding generations.

The Minister also impressed on the need for widespread social support among the elderly which enabled them to believe that they were loved, esteemed and valued by the rest of the society.

“Social support contributes to the health and wellbeing of the elderly. The presence of a strong support system, with caring familiar others helps to reduce isolation. In the absence of social support, feelings of helplessness, inadequacy and dependency preoccupy the minds of the elderly,” he said.

The month of activities this year included a march through Charlestown on Thursday, a Church service on September 4th, a symposium on aging with the focus on human rights and the care of the elderly and a senior’s field trip to St. Kitts on the 27th.

The Social Development Minister used the opportunity to thank the elderly for their contributions to Nevis.

“On behalf of all of us in the Nevis Island Administration I want to use the celebration of the elderly in this month of October to say thank you for your contribution to the society, thank you for guiding the generations with which you have been charged.

“Our task is to ensure that the values of decency, honesty, goodwill, discipline and self respect which you so ably passed on, are passed on to succeeding generations,” he said.