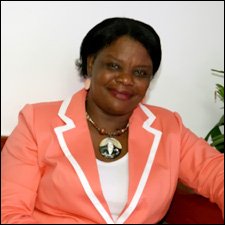 Director of the Development Projects Foundation Incorporated Mrs. Myrthlyn Parry has invited persons from all sectors of Nevis to join forces with the organisation in its mission to assist with the development of Nevis.

Mrs. Parry issued the invitation on Tuesday, when the Foundation and corporate partner the Mount Nevis Hotel through combined efforts, handed over a new medical autoclave to the Alexandra Hospital.

The Foundation, a non profit company, was incorporated in January 2008. It was established to access funding from international and regional organisations and locals who were interested in the island’s development.

The Foundation’s Director said so far the organisation had given assistance in areas among them education and health.

“We have tiled five classrooms and the Science Lab at the Ivor Walters Primary School and constructed a permanent stage there. We have assisted the Gingerland Health Centre with office equipment and furniture.

“We have assisted the Dyslexia Association Nevis with equipment, teaching material and office supplies. We have provided computers for some government offices and programmes in Nevis and we have financed the construction of a Sick Bay at the St. James Primary School,” she said.

Mrs. Parry explained that at present, the Foundation was engaged in a number of other health related projects.

“At present we are involved in efforts to obtain a 40 foot container of medical supplies and equipment for the Alexandra Hospital. I would like to commend the efforts of Dr. Wayne Bossola of the United States of America who is spearheading the fund raising effort on behalf of the Foundation also to Dr. Meguid of the Mount Nevis Hotel, who is committed to helping us with this project as well.

“The Development Projects Foundation is also presently involved in raising funds to purchase eight 1,000 gallon close top Buffalo water tanks for the health centres on Nevis. These catchments are necessary so that in the event of a storm or natural disaster of any nature, the supply of water to these health facilities would not be interrupted,” she said.

Mrs. Parry also noted that the Foundation was instrumental in obtaining generous assistance from the Mount Nevis Hotel when it purchased the new steriliser for the Alexandra Hospital.