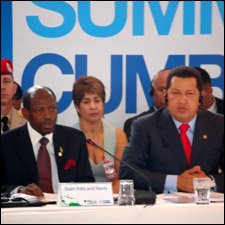 PetroCaribe is one of the most progressive agreements that have been made in Western Hemisphere, says St. Kitts and Nevis Prime Minister Hon. Dr. Denzil L. Douglas.

In an opening statement at the Summit of Latin American and Caribbean leaders on Friday, Prime Minister Douglas recognised the crucial contribution of PetroCaribe in view of the global economic challenges and to the extent that energy plays a critical role in the ability of nations to sustain development and reduce poverty.

“Certainly, as a response to energy, social and economic challenges, it stands out as a beacon that enhances the prospects of growth and development in Latin America and the Caribbean,” Prime Minister Douglas told the Presidents and Prime Ministers among the 260 delegates to the one-day 6th PetroCaribe Summit.

Expressing gratitude to Venezuelan President, His Excellency Hugo Chavez, who was present, Dr. Douglas thanked the people of the Bolivarian Republic of Venezuela for initiating and supporting this tremendous tool of development.