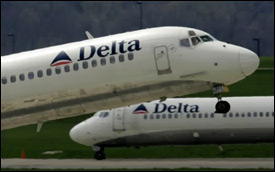 The Atlanta-based Delta Airlines is to increase the number of flight to St. Kitts’ Robert L. Bradshaw International Airport later this year.

These flight times allow for convenient round-trip connections from over 90 airports in the U.S. and Canada. Delta will use a 124-seat, 737-700 Boeing aircraft with 12 business class seats and 112 economy seats for this flight.

“The addition of a second non-stop flight by Delta is very significant for St. Kitts,” said St. Kitst and Nevis Minister of Tourism, Sen. the Hon. Richard “Ricky” Skerritt.

“Particularly in the current global economic conditions, the fact that Delta is increasing service demonstrates confidence in the St. Kitts tourism product.  It will be a valuable complement to our overall existing airlift and provide greater flexibility for travelers via the world’s largest airline hub,” said Sen. Skerritt.