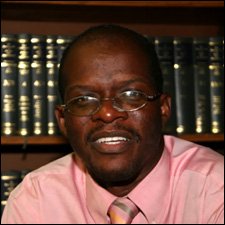 Attorney General and Minister of Legal Affairs, the Hon. Patrice Nisbett is celebrating the 10th anniversary of his entry into the Federal Parliament.  In celebration of Mr. Nisbett’s accomplishments, a week of activities will commence from March 10th-14th, 2010.

Activities for the week will include the opening session of the National Assembly at 9:30am, followed by a community meeting at the Violet O Jeffers Nicholls Primary School that evening.

On Thursday, March 11th Mr. Nisbett is planning to give out gift baskets to the elderly and the less fortunate in the St. James/St. Thomas’ community.  Later that evening the Minister will be a guest on the popular radio program, Tell Me on Choice 105.3 FM at 8:00 pm.

Friday, March 12th, Minister Nisbett will have a talk at the St. James Primary, the Violet O Jeffers Nicholls Primary and the St. Thomas’ Primary Schools.  During that evening there is a planned moonlight walkathon from Camps gate to Oualie Beach.

A festive Block party will take place at Camps from 8:00 p.m on Saturday, March 13th. The week of celebration will culminate with a worship service at Combermere Methodist Church at 9:00 am.

Hon. Nisbett, the then St. James/St. Thomas’ only Nevis Reformation Party (NRP) representative in the Federal House went to Parliament in 2000, when his government was in Opposition in Nevis. Today he is the Attorney General and Minister of Legal Affairs and Justice in the Federal Parliament.

A decade later, the NRP is holding the reins of Government with the Premier of Nevis, Hon. Joseph Parry at the helm.

Hon. Nisbett believes that sticking to his values is the secret to his success. He also said that the NRP will continue to push for sustainability, fairness, devolution of power, progress and transparency and in turn, expand its support base.