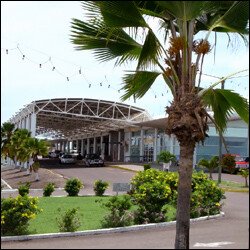 Efforts were made on Friday to ensure the speedier, more comfortable and convenient process of departing passengers at the Robert L. Bradshaw International Airport, especially on weekends.

Prime Minister and Minister of Tourism, Hon. Dr. Denzil L. Douglas following reports of recent “bottlenecks” from passengers being processed in the departure area toured the airport on Friday to see what can be done physically to “rearrange and facilitate the speedier processing and more convenient flow of persons leaving.”

The policies of the governing St. Kitts-Nevis Labour Party Administration under the leadership of Prime Minister Hon. Dr. Denzil L. Douglas has resulted in St. Kitts and Nevis becoming a well sought after tourism destination in the Caribbean and have attracted several international flights to the Federation.

“British Airways has decided to commence a second direct flight from March of next year from London-Gatwick and on December 26th this year. Delta Airlines begins a second non-stop flight into St. Kitts,” said Prime Minister Douglas after the tour.

He said attention was given to the physical space and he has listened to what is possible in reconfiguration of the departure area.

“I have asked them to get it done quickly. I want it done before the end of the year, even if it is going to be a temporary arrangement to facilitate the increased number of passengers who are coming into this country and who have to exit within a specific time frame,” said Dr. Douglas.

He said he has had the assurance that work will begin almost immediately to facilitate the request that has been made.