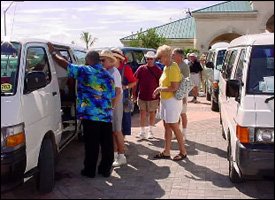 A bill to provide for the designation of prescribed areas and the regulation of taxis and tour buses which operate in those areas goes to the National Assembly on Thursday.

Minister of State in the Ministry of Tourism, Sen. the Hon. Richard “Ricky” Skerritt will pilot through all three stages the Saint Christopher Tourism Authority (Prescribed Areas) Bill 2009.

Part I provides for preliminary matters such as the short title and the interpretation of terms used including “business license,” “dispatcher,” “operator,” and “permitted taxi or tour bus.”

Clause 4 makes provision for the prescribed areas to be set out in Schedule 1 and provides that only a person holding a taxi and tour bus permit issued by the Authority may operate a taxi or a tour bus in those areas.

Clause 5 makes provision for the issuing by a police officer of a notice with a fix penalty to any person who contravenes clause 4.

Clauses 6 to 14 contain, among other things, provisions relating to the application for a permit, the issuing of a permit as well as the refusal, revocation and suspension of the permit.

It is provided in clause 15 that any person aggrieved by any decision of the Authority in granting or refusing to grant a permit may appeal to the Appeals Tribunal to be established pursuant to clause 20.

Part IV provides for miscellaneous matters including the establishment of the Appeals Tribunal, the training and certification programmes and the duties of dispatchers and inspectors.

The proposed prescribed areas are the Robert Llewellyn International Airport, the Deep Water Port, Port Zante, all areas of downtown Basseterre outside of the commuter omnibus route, Brimstone Hill Fortress National Park, the Caribelle Batik factory or Romney Manor Parking Lot; the pick up or drop off area to the Wingfield Rainforest or any other rainforest in St. Kitts, any beach located in Frigate Bay or on the Southeast Peninsula, any pick up or drop off area located at any restaurant or tourist accommodation that is any apartment, hotel, guest house or any other premises where accommodation for tourists is for reward, the lookout at Timothy Hill, Black Rocks, train depots of the St. Kitts Scenic Railway or any other areas that the Minister may designate by Order.