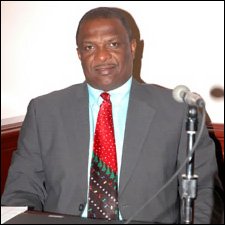 A Member of Parliament in the St. Kitts and Nevis National Assembly has called on Mr. Eugene Hamilton, the Branch Manager of the local British American Insurance Company Limited to give an account of his failure in discharging his duties.

The Hon. Cedric Liburd, Parliamentary Representative for Constituency # 8 and Minister of Agriculture, Housing, Fisheries and Cooperatives slammed the total silence of Mr. Hamilton at a news conference called by the opposition People’s Action Movement (PAM) at which all the questions on British-American were answered by the party’s political leader, Mr. Lindsay Grant.

“I do believe that Mr. Hamilton would have received training that would allow him to provide such quality service to policyholders and investors. He then should know that a signed policy is good faith between the policyholder and the company and as the Branch Manager he is expected to demonstrate a level of accountability that cannot be passed on to Mr. Grant at a press conference,” said Mr. Liburd in a statement.

He said policyholders still need to hear from Mr. Hamilton in his capacity as the Branch Manager of British American “and not from Eugene the politician, sitting dumbfounded at a PAM press conference. The policyholders need to hear him speak to the issues that are “˜bread and butter’ to them.”

“They need to hear information on the security of their investments and not political bantering and blame,” said Mr. Liburd, who also scoffed at suggestions in the opposition-owned paper and on its platform that Prime Minister Hon. Dr. Denzil L. Douglas is to blame for the problems of British American.

“Dr. Douglas is not the General Manager of British American here in St. Kitts? From all accounts, the Prime Minister never promised 8 percent interest on investments made at British American. Dr. Douglas never received hundreds of thousands of dollars in commissions on the sale of policies; neither did he attend the million-dollar roundtable as a result of riding on the backs of the same policyholders,” said Liburd, who noted that Prime Minister Douglas himself has publicly called upon Mr. Hamilton to be forthright and honest with policyholders rather than hiding behind the Douglas-led administration which so far has been working with regional institutions and governments to find a solution to this crisis.

“It is time that Mr. Hamilton retracts the dastardly statement made at St. Peter’s on Thursday 16th July 2009 where he lied to the people by insisting that “˜the day the Government change is the day the problem solve’,” said Liburd.

He called on Mr. Hamilton, one of two Deputy Leaders in the People’s Action Movement (PAM) to stop making sensational promises that he cannot deliver and to stop using the misfortune of his own policyholders to attempt to get into political office.

He noted that policyholders are hurting and issued an appeal to Mr. Hamilton to become accountable to the policyholders. Mr. Liburd also called on Mr. Grant to understand the plight of the policyholders and annuities investors, which was so lacking when he declared that Mr. Hamilton, in a PAM administration, will become the minister with responsibility for the multi-million dollar St. Kitts and Nevis Social Security Scheme.