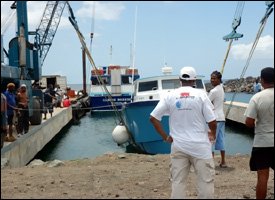 Boats Being Lifted To Safety In St. Kitts
Photo By Erasmus Williams

The parade of boats of all sizes this weekend showcased to nationals and boat owners the importance of the recently opened St. Kitts Marine Works Limited.

And so the parade of boats began Saturday with the arrival and storage of 12 boats including Shiggidy Shack, Caribsurf, Sea Monkey, Over Exposure and the St. Kitts-Nevis Coast Guard vessel, Arden.

On Sunday, Francis, the Department of Fisheries “Opportunity” and the Carib Breeze were among the several boats removed from the sea to shelter.

Francis, assisted by Operator/Boatyard Manager, Brian Berry, used the 165-ton Travelift to remove the boats from the sea to the boatyard.

The Customs and Excise Department cleared the boats coming from St. Maarten and St. Eustatius.

The movement of the vessels attracted scores of residents who came in cars from several areas and nearby villages.

The St. Kitts Marine Works Limited is one of three boatyards in the Caribbean with this type of facility.

SKMW’s storage area is 12 acres and it is hoped to expand to 26 acres in about two years, said Francis.

Pressure washing, steam cleaning, sandblasting and welding are among the services offered. Machinists and mechanics are on call. High speed Internet, closed-circuit TV linked on the Web, electricity, water and 24-hour manned security are also available.