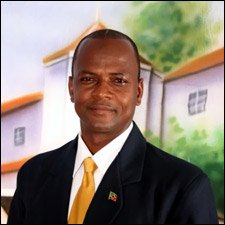 Mr. Junie “Scrape” Hodge, the young, exciting and dynamic PAM representative for constituency #6 will next week be making history when he opens a People’s Action Movement constituency office in Const #6  for the first time.

On Tuesday 30th June in a grand affair which will include  an  official PAM Constituency #6 Campaign and Candidate Launch and rally  the People’s Action Movement will be officially opening the doors for the first ever PAM Constituency office in the constituency.  This will be the first time that the People’s Action Movement has opened a constituency office in the historic village and birthplace of the country’s first national Hero Sir Robert Bradshaw.

The PAM candidate will be joined by all of his shadow cabinet colleagues including PAM Political Leader Mr. Lindsay Grant and MP Hon. Shawn K. Richards at the milestone event.

At the event brief remarks will come from Poltical Leader Mr. Lindsay Grant among other

The event will mark the official launch of Junie “Scrape” Hodge .. Hodge has been on the PAM platform for quite some times and  is regarded as one of the party’s brightest and most dynamic and exciting speakers and personality.

Since his unofficial entrance unto the political scene as the PAM candidate for const #6 the young  Hodge has created  such a buzz and fervor that the Prime Minister has been forced into campaigning heavily in this traditionally secure Labour party seat. The seat has never been won by PAM. Hodge’s dynamism, humbleness and genuineness has endeared him to the entire constituency and he is expected to provide arguably the most formidable challenge to any Labour Party Cabdidate in the constituency and the Prime Minister .

The office will be the first People’s Action Movement office in the area and is expected to served the people of St.Pauls,Newton Ground and the surrounding areas before and  after the next general elections.

The office will be manned by residents of the area and will serve as Hodge’s base where he will facilitate visits from constituents and villagers .

“PAM and Junie Hodge  are here to help and serve the people of Constituency #6 and I hope that the office will enable us to do that,” said Hodge.