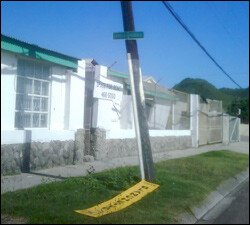 The Labour Party are once again showing their true nature, bad intentions and desperation as they have seemingly launched an all out assault on the election materials of the People’s Action Movement.

A number of posters and strip-sized billboards of the  the St.Kitts-Nevis Opposition People’s Action Movement PAM have been vandalized and torn down.

The Posters of Glenroy Blanchette could be seen lining the Newtown Bay Road on Sunday afternoon as vandals ripped them down the night before. PAM Leader Lindsay Grant not only had some of his boards and posters torn down but some were actually spray painted red from top to bottom as well in the Old Road Bay area.

The election materials were vandalized by a number of individuals who have been allegedly paid by the Labour Party to embark on a systematic programme of destroying PAM election paraphernalia.

“The vandalism of our boards are a sign of desperation, weakness and attempted intimidation,” said PAM Candidate Glenroy Blanchette. “The labour party is showing it’s weakness as they are alledgedly taking advantage of the dire situations of most of our young men and putting them in variance with the law by paying them to go around the country tearing down and vandalizing PAM boards. This is not only an attempt to try and intimidate PAM but it is also a clear indication of the desperation and weakness of a governing labour party who sees defeat staring them squarely in the face come the next elections,” Blanchette continued.

The Labour party has employed similar tactics in past elections . However the significance and severity of the PAM challenge this time around has resulted in an intensification and broadening of the “desperado-type” campaign of Labour.

During the party’s public meeting on Thursday evening at Green Tree PAM leader Lindsay Grant made a plea to his supporters and all citizens of the federation to conduct themselves in a tolerant, civil and peaceful manner during the remaining 2 -3 weeks leading up to elections.

“I want to encourage all to conduct themselves in a very vigilant but tolerant and peaceful manner this elections,” said Grant. “This is a serious election. The most serious elections in the history of this country. Let us all conduct ourselves in a civil manner. But be vigilant and do not allow wrongdoing to take place,” Grant continued.

The Labour Party’s alledged employment of these “desperado-type” campaign tactics highlights the desperation to stay in power of a Labour party who the majority of people, according to recent polls, wants to see out of office.