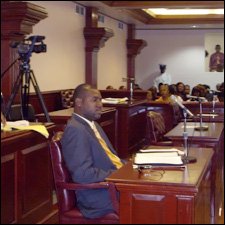 Former speaker of the St. Kitts and Nevis National Assembly has accused the lone Parliamentary Representative for the opposition People’s Action Movement (PAM), Hon. Shawn K. Richards for having no respect for the lawmaking body.

Ms. Liburd, who also served as a Senator on the Government Side before being elected Speaker said when Mr. Liburd showed up in Parliament with one earring in his ear, she said to him privately “˜Shawn you should not wear  an earring. The very next sitting, he came with one ring in each ear.”

“He said at the recent meeting in Molineux that they told him to take out his one earring and he came in two, but when he was going High Court to appear before the Judge, he took them out, because he has no respect for those in Parliament,” said the former Speaker.