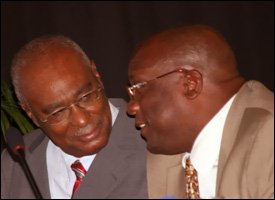 Federal Minister of Finance Hon. Timothy Harris said the people of Nevis could use the ongoing world recession as a time to stand out if they rallied together and exercised the appropriate resilience, energy, passion and fortitude that were needed to triumph over that period of adversity.

Mr. Harris was at the time the delivering remarks at the 3rd Annual Consultation on the Economy at Occasions on Tuesday.

Ã¢â‚¬Å“I want to assure you that the good people of Nevis possess all the foregoing virtues and capabilities “¦butt these qualities must be pooled together and the people must be prepared to work as a team,Ã¢â‚¬ he said.

Mr. Harris told the over 200 drawn from the pubic and private sectors and civil society that their presence at the consultation signaled their intention to work hand in hand with each other.

However, he noted that the conference should not be seen as the culmination of the thrust into a national partnership but rather as a recommitment to nation building.

Ã¢â‚¬Å“The people of Nevis must go forward in a culture of hope and encouragement, if we are to surmount the vagaries and vicissitudes of the pandemic of the global economic and financial crisis, so that we can emerge from it as a buoyant and robust people and nation,Ã¢â‚¬ he said.

Mr. Harris who is also the Minister of International Trade, Industry, Commerce and Consumer Affairs, pointed to his presence at the Consultation, which he said was indicative of the level of co operation and understanding that existed between the Federal Government and the NIA, in the pursuit of common objectives for the benefit of all the people.