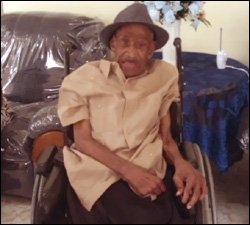 Many balloons, presents and cake decorated the lounge area of The Grange Health Care Facility as part of festivities in celebration of the life of Mr. Solomon Queeley who attained 102 years of age, last week.

This achievement makes Mr. Queeley, who was born in Nevis, the oldest male in the Federation.  One of the recurring themes during a brief ceremony at the Grange, was the need to care for one’s elderly who posses a wealth of knowledge and experience.  This was expressed by Supervisor of Social Services Mrs. Ann Wigley who said that the Ministry of Social and Community Development and Gender Affairs was doing all within its power to ensure that the value of senior citizens is appreciated.  She thanked The Grange for its hard work noting that care of the elderly is a labour of love.  Supervisor Wigley also mentioned that her ministry was working on an archive which would preserve the verbal information of the senior citizens because it is very important to document the information.

Chief Executive Officer of The Grange Mrs. Pat Richards-Leader said that the facility would also be celebrating nine years of existence providing another reason for celebration.  She said that Mr. Queeley came to reside there after it had been in operation for two years.

Mrs. Leader said that he came there a few days after his 95th birthday and it had not been expected that God would prolong his life for another seven years.   She said it demonstrates that persons should not be judged by their age but as long as they are given a lot of love and attention it is possible for them to flourish and blossom like Mr. Queeley.  She thanked all of the staff for their hard work particularly Mrs. Griffin whom she said had been there from the start of the facility.  With a sense of pride, the CEO of The Grange stated that August 14, would be the 9th Anniversary of the facility for the care of the elderly.

Mrs. Wigley revealed that Mr. Queeley’s relatives mostly live abroad, yet by placing him at The Grange, they ensured that he is comfortable and well taken care of, enabling him to attain his current age.  One family member was on hand to wish him well from his children and grandchildren in Canada.  She wished him God’s blessings and hoped that he would live to see 105.

As a representative of Ministry of Social and Community Development and Gender Affairs Mrs. Wigley also visited and congratulated Evangeline Maynard of Sandy Point who attained 92 years of age and Margaret Farrell who turned 82 on the same day as Mr. Queeley.