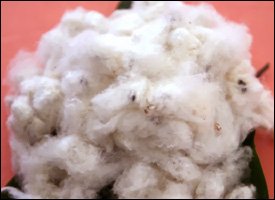 The establishment of a co-operative to look after the interest of Sea Island Cotton Farmers on Nevis has been described as a strategic move by the Department of Agriculture, to ensure crop sustainability.

At the launch of the Nevis Sea Island Cotton Co-operative Society Ltd. (NESICOPS) at Prospect on Wednesday, Director of Agriculture Mr. Keithley Amory said the event’s theme “Reviving the Cotton Industry on Nevis” embodied a bold move by the Nevis Island Administration (NIA) to replant Sea Island Cotton in 2007, in its efforts to diversify the economy of Nevis.

The move he explained was part of the NIA’s plan to diversify the economy; refocus on a crop that had a lucrative market and a willing buyer who was prepared to purchase the crop even before the cotton was planted.

“This move was due in part to a renewed interest in farming by young enterprising persons, the increase in price that was being offered for this crop and the need for Nevis to have once again an export crop to generate foreign exchange for the country.

According to Mr. Amory, on May 11, 2009, NESICOPS was registered under the St. Christopher and Nevis Co-operatives Societies Act No. 2 of 1995 under the Presidency of Mr. Winston Pinney.

However, it was not before repeated calls by the Department for the formation of a co-operative that a group was registered.

Mr. Amory noted that for the 2007-2008, season eight farmers were willing to invest in the cultivation of cotton; for the 2008-2009 crop, 12 farmers indicated their willingness but only eight persons planted. For the 2009-2010 season, with increased interest by the Japanese buyer, 15 persons some of whom had never planted cotton before, had seen its benefits and came forward.

An interim Board of Directors was selected to initiate the formation of the cooperative. All members were required to attend an intensive training programme in cooperative education, tutored by Director of Cooperatives Mr. Edred Ward.

Mr. Amory said the By-laws of the Society were fine tuned several times until both potential members and the Registrar of Cooperatives were satisfied.

Among the objectives of NESICOPS are to promote the social and economic interest of members in accordance with cooperative principals; assist members to improve their cotton production and to encourage and assist in conducting educational programmes, designed to stimulate a favourable interest in cooperatives and cotton production.

It will also strive to develop the most satisfactory relations possible with members, the community, government and other agencies or organisations and to participate in any programmes aimed at the protection and preservation of the cotton resource of the Federation of St. Kitts and Nevis.

Mr. Amory referred to the Society as a young one which needed much guidance to engender its success. He used the opportunity to pledge the Department of Agriculture’s full support, even though the cooperative’s members were the ones ultimately responsible for its success.