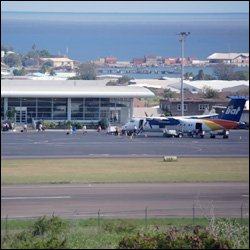 LIAT ““ the Caribbean airline has been invited to submit proposals to Eastern Caribbean Ministers of Tourism, through the OECS Secretariat, outlining various ways in which member states can assist in improving intra-regional travel.

So said the Federation’s Minister of Tourism, Sen. the Hon. Richard “Ricky” Skerritt, who was among OECS Tourism Ministers meeting in St. Lucia for the 9th Council meeting against the backdrop of an overall 12 per cent decline in stay-over arrivals in the sub-region last year, with at least five OECS countries registering double digit slides.

Minister Skerritt and his colleagues acknowledged the difficulties LIAT face in a small market without economies of scale in many instances, with high maintenance and equipment costs, but also emphasizing the need for LIAT to continue to find ways to minimize the cost of travel.

The Ministers are of the view that the adverse impact of the global economic crisis on sub-regional tourism will extend well into 2010.

The high cost of intra-regional travel has been a major concern among OECS countries, some of which say that the situation has impacted negatively on their tourism sector.

A delegation from the airline met for over two hours with OECS Tourism Ministers to make a presentation on the carrier’s operational and marketing strategies.

St. Kitts Tourism Minister Ricky Skerritt told reporters that the presentation by the airline, which was followed by what was described as a lively discussion, focused on LIAT becoming more tourism friendly, recognising the importance of intra-regional travel to the tourism dependent economies of the OECS.

“I think all concerned acknowledged the difficulties LIAT face in a small market without economies of scale in many instances, with high maintenance and equipment costs, but also emphasizing the need for LIAT to continue to find ways to minimize the cost of travel,” Skerritt said.

“We have invited the airline to submit proposals to us through the OECS Secretariat outlining various ways in which member states can assist in improving intra-regional travel,” he added.

The regional carrier has had a monopoly of intra-regional travel since it purchased the assets of its former competitor, Caribbean Star, in October 2007.

But the airline has been criticized especially by St. Lucia and Dominica for having a fare structure that discourages intra-regional travel.

In the case of St. Lucia, the island is the airline’s third largest tourist market.

Tourism Minister Hon. Allen Chastanet, a leading critic of LIAT, was absent from the OECS Council of Tourism Ministers meeting being grounded in the UK as a result of the volcano related travel crisis.

The meeting also proposed that the regional airline review its baggage policy, particularly issues dealing with baggage allowances as it relates to specific groups travelling for sports and entertainment.

“We requested that wherever possible the airline facilitate at little or no cost the second baggage piece for those specific groups or individuals,” Skerritt said,

“All indications are that the adverse impacts of the global crisis on tourism performance in the OECS are likely to extend well into 2010, given the lag in the response of employment and incomes to the recovery of economic activity, as the major tourism source markets in the USA and Europe climb out of economic recession,” OECS Director General Her Excellency Dr. Len Ishmael said.

She added that in the case of the United Kingdom and, to some extent, Europe, the demand for travel to the Caribbean, including the OECS, will be dampened by the imposition of an increase in the UK’s Air Passenger Duty on airline tickets.

“The likely continued slow recovery of tourism means that some of the policy measure that OECS Member States found it necessary to adopt in the immediate aftermath of the onset of the global crisis, may have to be sustained into 2010,” she said.

“These might include expanded but carefully targeted marketing, and negotiation of new airlift capacity.”

The OECS Director General said that a continued programme of support to small and medium sized hotels and other core tourism enterprises might also be warranted, linked to adherence to relevant operating standards and the achievement of appropriate performance measures.