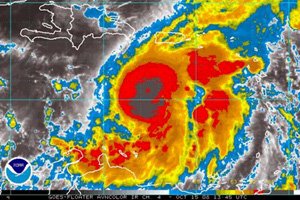 An Organisation or East Caribbean States (OECS) official advised Caribbean islands to begin early preparations ahead of the 2010 Atlantic Hurricane Season, which forecasters expected would be an above average season from June 1st.

Head of the OECS Secretariat’s Environmental and Sustainable Development Unit based in St. Lucia Mr. Keith Nichols, gave the advice during an interview with the Department of Information, hours after the latest news broke of the predictions on Thursday.

“Every country has to take responsibility. Then again the disaster preparedness offices, the NEMOS or the equivalent in other countries need to advance the preparations and get the various disaster committees in place and working to reduce risk around our properties [and] our communities,” he said.

Mr. Nichols said the expectation of an above average hurricane season was never comforting news to the Region given its history over the last three decades with hurricanes.

“The hurricane season which starts officially starts on June 1st is just around the corner. If we are expecting an above average hurricane season, there is always a potential that we will be hit by a hurricane.

“We can’t always feel that we have been hit a touch in the last few years, so we will escape this time. We are never sure of that and we always need to be prepared. We need to be very, very vigilant and to remove the threats around our properties,” he said.

According to Mr. Nichols, the OECS Secretariat had been involved in an ongoing risk reduction programme within the region and had been pursuing options at building resilience to hurricanes or to disasters overall but more so hurricanes.

“We of course have tremendous experience of lost buildings in this Federation and other countries which suffer loss of life, property in recent times and we need to be on our guard.

“There is alot of talk about retrofitting houses, buildings putting in hurricane roof straps to keep roofs in place. We need to be vigilant [and] to ensure that our properties are clear of potential threats and hazards. Trees are also a potential threat, limbs and lose material around,” he said.

Meantime, Minister responsible for the Environment on Nevis Hon. Carlisle Powell said Nevis could ill afford the effects of a hurricane.

However, the Minister noted that he remained very optimistic but reiterated the need for Nevisians to prepared early rather than wait for the last moment to make sure that secured their property.

“We still ask people to know that there is a hurricane season which is approaching, while we hope for the best prepare for the worse,” he said.