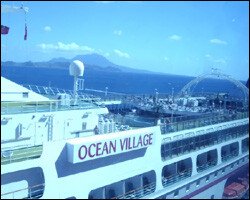 Zip-lining in St. Kitts is among new excursions in the Caribbean being offered by the British cruise line Ocean Village.

Zip-lining is among the line’s 140 Action Ashore activities available during the 2009-10 Caribbean season and is among its widest range of shore excursions for the final season in the region.

Other new excursions are snuba diving, which allows passengers to go diving without having to use oxygen tanks in St Lucia, riding around St. Maarten on a Harley-Davidson motorcycle or river tubing in Grenada.

“Our farewell Caribbean Action Ashore programme is like a compilation of our greatest hits: activities which have thrilled and chilled Ocean Village passengers since we launched in 2003,” said Head of Marketing, Gill Haynes.

Ocean Village and Ocean Village 2 have a total of 10 calls to Port Zante during the 2009/2010 cruise ship season.

Ocean Village is running 14-night Caribbean cruises from November until March 2010 with prices starting from £1,298 including flights and transfers. The line will be closed by owners Carnival UK after the summer 2010 season.