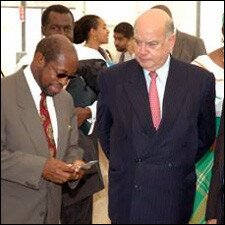 The Secretary General of the Organisation of American States (OAS) says that from all indications the people of St. Kitts and Nevis exercised their civil responsibility “in a free manner.”

In a congratulatory message, the OAS boss hailed the election victory of the St. Kitts-Nevis Labour Party (SKNLP) and the re-appointment of Dr. Douglas as Prime Minister of the Federation of St. Kitts and Nevis.

“Indeed, you have made history by being one of the few political leaders in the Caribbean to secure a fourth term of office in government. This is confirmation of the confidence which the people of St. Kitts and Nevis have in your leadership,” said the OAS official.

“From all indications, the people of St. Kitts and Nevis were able to exercise their civic responsibility in a free manner and voting took place in a calm and dignified atmosphere. This is a tribute to the culture of democracy for which your country and the rest of the CARICOM Caribbean countries are well known,” said the OAS Secretary General, who extended the support of the western hemispheric body to Dr. Douglas and his Labour Government “in this new decade.”

Mr. Insulza informed Dr. Douglas that he hopes to be in the Eastern Caribbean in February and hopes to have the opportunity to visit Basseterre and “to congratulate you personally on your electoral victory.”