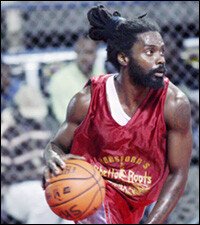 The SKABA basketball executive met on Thursday evening at the offices of the SKNAAA to discuss plans for the upcoming 2010 Basketball season.

Matters discussed included the start of the 2010 season which was set and finalized at March 6th for the junior divisions and 4 weeks later on April 11th with the official opening and the start of the Premier and “A” Divisions. The female division start date will be announced at a later date .

The junior division age limit remains the same at 19 and under which means that no one attaining the age of 20 during this year of the season will be allowed to play in the junior division.

The SKABA management informed teams that the first general meeting for 2010 will be held on Thursday February 11th at the Warner Park Stadium conference room.

The Executive also indicated that referees/coaches clinic will be held prior to the official start of the league. The clinics will be mandatory for all persons who are interested in coaching teams for the 2010 season. According to an official of the association this will be a keenly monitored aspect of the preparations leading up to the start of the league as it is felt that every coach should be at least SKABA certified in order to ensure a league of a very high standard. Strict dress codes will also be introduced the official stated.

The SKABA Executive also announced 2010 as the year that will be dedicated to the revilisation and resurrection of its National Teams.

“The national senior and junior teams have been somewhat dormant over the last 2-3 years and we felt that it is essential for the development of our basketball that both teams be revitalized and re-energized,” said SKABA General Secretary Wallis Wilkin

The revilization programme also comes in light of the fact that the SKABA has been invited by a number of other associations to take part in a number of regional Junior and Senior Tournaments, most notably a Caribbean Basketball Tournament which is being organized and hosted by the Trinidad Basketball Association.

“We are excited about the so called revitalization of our National teams,” said SKABA Gen Sec Wallis Wilkin. “There are a number of players based locally and overseas who we are confident can compete at the highest level regionally and we will certainly be anxious to showcase those players in the upcoming tournaments,” Wilkin continued.

The SKABA General Secretary also indicated that the association is now accepting applications for the posts of Technical Director and or Coach for the National Senior and Junior teams. The technical director and or Coach will be responsible for developing the preparation programme for the national teams for the tournaments which will take place in the latter half of 2010.

The 2010 season is expected to be full of much interest as Horsfords Ghetto Roots will be trying hard to repeat as SKABA champions in the same dominant fashion as they did in the finals last season where they swept the Rams Hitters. Ghetto Roots still boasts the leagues top players in Rymal “Bally” Browne and Levi “By-By” Fyfeild. St.Pauls and Hitters will likely be the next 2 teams that may provide the stiffest challenge to Ghetto Roots Premier Division dominance.

In related news the Ghetto Roots Basketball Club has announced the start date of it’s inaugural “Out of Season” East Basseterre Basketball League. The start date of the projected 4 week community league is February 20th 2010. According to one of the organizers of the league the tournament is expected to featured 8 teams including 3 specially invited teams and 5 East Basseterre and Ghetto Roots Basketball Club based teams. Further details on the league can be obtained from Wallis Wilkin @ 662-5152 and Teneille Lapsey @ 664-8322.