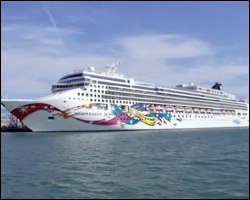 The parade of cruise ships to St. Kitts’ Port Zante for November begins Wednesday with the visit of the 92,000-ton Norwegian Jewel of the Norwegian Cruise Line (NCL).

It will be first time that the Bahamas-registered cruise vessel, which has a passenger capacity of 2,376 passengers and a crew of 1,100 will visit St. Kitts – Nevis.

Well-informed sources said the Norwegian Jewel will arrive from Tortola at 7 o clock with 2,410 passengers on board and will depart at 4 “˜o’ clock, spending Thursday at sea and docking in Curacao on Friday.

According to information from the Marine Division of the St. Christopher Air and Sea Ports Authority SCASPA), a total of 24 ships with an estimated capacity of 52,000 passengers are scheduled to berth on 25 cruise ship days in November.

Smaller cruise vessels such as the 255-passenger Royal Clipper; the 400-passenger Silver Shadow; the 820-passenger Braemar and the 308-passenger Windsurf have calls scheduled in November.

An analysis on the impacts of passenger, crew and cruise line spending carried out by the Florida-Caribbean Cruise Association, on the 26 cruise destinations during the period May 2008 through April 2009 showed that cruise tourism pumped US$44 million or EC$118 million into the St. Kitts and Nevis economy during the 2008/2009 cruise year.