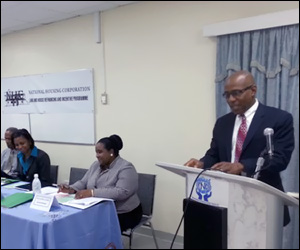 The Ministry of Housing is revisiting a number of its policies and procedures with a view to providing the best opportunities for citizens to achieve land and home ownership.

In a press conference paneled by the Minister of Housing, some members of the Board of Directors and some administrative staff, the National Housing Corporation (NHC) on Wednesday (January 15) announced the roll out of two new initiatives that is sure to put a positive spin on the relationship between the corporation and its customers.

The general objectives of the new initiatives as articulated by NHC General Manager Judith Rawlins are to remedy some of the problems customers have been experiencing and provide improved services for new and potential customers of the corporation.

Minister of Housing Honourable Dr. Earl Asim Martin was proud to report that over the last seventeen years the National Housing Corporation has built thousands of houses on St. Kitts and Nevis, distributed over five thousand plots of residential land and entered mortgage arrangements with more than one thousand five hundred home owners.

The Minister explained in the same breath however, that the challenge of being cost effective whilst maintaining quality assurance in the delivery of service is quite huge, but the National Housing Corporation remains the primary service provider in housing in the federation.

“The government of St. Kitts and Nevis has created within the corporation, a social responsibility to advance our people through land ownership to provide shelter to the less fortunate and the physically challenged” said Minister Martin.

The minister also said that government understands that in order for the NHC to remain effective and to sustain its advancement in housing, firm and disciplined measures have to be taken to regularize the payments of contributors to the system to safeguard the future of the NHC.

Although the global crisis has compounded the challenge of providing housing in the federation with the rising cost of construction and construction materials in 2013, the demand for housing in St. Kitts and Nevis remains high. The NHC has sought to tackle the very serious challenge of reducing payment delinquency by rolling out two major initiatives.

The NHC Land and House Refinancing and Incentive Programme will, as of January 01, 2014:

Meanwhile, the Habitat Independence 30 Programme, a new housing scheme to be undertaken by the NHC will construct five hundred new homes throughout the island in 2014. Apart from the direct benefit this scheme will provide to new home owners, it will also secure employment for contractors, employees, food vendors and other stakeholders to this important venture.

In addition, the Ministry of Energy is nearing rollout of a new programme that will offer solar panels to persons already living with NHC mortgages, in a way that would sustainably create savings based on individual home energy usage and with the most cost effective arrangements to the consumer.