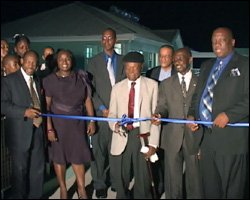 Senior citizen Elvin Bailey of Saddlers beamed with pride when he cut a symbolic blue ribbon to officially open the Saddlers Secondary School on Wednesday.

The chorus of cheers that followed was a reflection of the community’s feelings for the new school as expressed to SKNIS by a number of teachers and students.

One young man explained that he felt privileged to be one of the fist persons to be enrolled in the school and as such wanted to ensure the school is not defaced or vandalized. A fellow student agreed and added that the technology component was “fun” and that he gained several new friends.

Teacher Lizca Bass noted that the environment at the facility is pleasant and very conducive to learning. She added that the technological component is a plus.

“It holds their interest, so if you’re doing math they’ll do it on the computer with an abacus and calculators (which) gets them into technology at an earlier age so that when they go off to university to study they are already familiar with the equipment,” she disclosed.

“Faculty member, Melissa Caesar Phillip explained that the smart board was complete new to her but she has since come to value the tool. She also marveled at the fact that students can access the internet wirelessly in each class room which lessens the demand to use the computer lab.