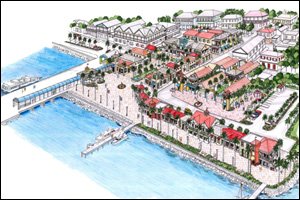 Chairman of the Charlestown Waterfront Development Project Committee and Cabinet Secretary in the Nevis Island Administration (NIA) Mr. Ashley Farrell, gave the assurance on Thursday that the project would not commence unless the drawings were reviewed and vetted by the Planning Division.

In an interview with the Department of Information at the end of one in a series of meetings with stakeholders in the project, Mr. Farrell explained that the Committee was in the process of meeting with all stakeholders to address any reservations they may have with the development project.

“We have met with the Nevis Historical and Conservation Society previously because they voiced certain concerns mainly to do with the environment and preservation of the historic Charlestown physical features. Having met with us they have come on board and they are in full support of the project.

“This morning, the Taxi Associations now that they have gotten more information about the project are very excited about the prospects,” he said.

Mr. Farrell explained that in the near future the committee would meet with the Tourism Allied Business Association (TABA) the Chamber of Commerce and the shop owners. A town hall meeting was also planned on site at the waterfront.

When asked whether the Committee had received any resistance to the project, Mr. Farrell said he didn’t think so but said there had been some concerns.

“We have not really had any resistance from persons. I think persons were a bit concerned that they [had only] heard about the project. Actually you couldn’t involve everybody in the preliminary discussions or you would not have gotten this far in as quick a time as we have gotten.

“What we are now doing is to involve all stakeholders and they will get a chance to see the plans. No work is going to be done, no plans are going to be approved unless Planning [Department] would have seen them and vetted them,” he said.

With regard to the project timeline for commencement, Mr. Farrell explained that the Nevis Island Administration (NIA) would first have to be in receipt of the building drawings and only then could demolition work commence.

“The project was earmarked to start in September but we now anticipate that it will start in December. We have to relocate the Development Bank, the Cultural Foundation, the Sports Museum and also the Craft Shop,” he explained.

The first phase of the project is expected to take from 12 to 15 months.

“Personally, I am very impressed and enthusiastic about the project. I think that with proper planning and execution, Nevis can benefit tremendously, not only taxi drivers.

“I think right across the board everybody on Nevis has a lot to gain from the development of this project. I say God bless and let’s go for it,” Mrs. Jeffers said.

“I can say we would love to see the pier extended so that we could get bigger boats to help the taxi men,” Mr. Dore said.

Apart from engaging with the stakeholders in the project, the Committee has in collaboration with the Legal Department reviewed the proposal submitted by developers NAMDA.

Members of the Committee have also been involved in the negotiation process. At the end of the negotiations the committee’s decisions were sanctioned by Cabinet.