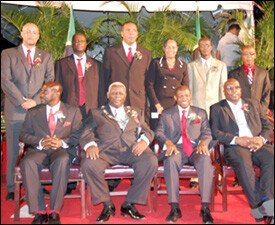 Prime Minister Douglas and his new ministers took the oaths of allegiance, office and secrecy administered by his Lordship Frances Bell during what CMC in Barbados described as a lavish ceremony witnessed by thousands at Warner Park in the capital. Governor General His Excellency Dr. Sir Cuthbert Sebastian presented the instruments of appointments.

Hon. Sam Condor, who has served as Deputy Prime Minister for the past 14 years, continues in that capacity and has been assigned the portfolios of Foreign Affairs, National Security, Labour, Immigration and Social Security.

Dr. the Hon. Earl Asim Martin has retained the portfolios of Public Works and Utilities that he held prior to the election and has also been given the responsibility of the Housing and Energy.

The new Attorney General and Minister of Justice and Legal Affairs is the Hon. Patrice Nisbett, who successfully contested a seat under the banner of the Nevis Reformation Party (NRP).

Former Speaker of the National Assembly, Hon Marcella Liburd, who won a seat on her first attempt for Labour, enters the Cabinet as Minister of Health, Social Services, Community Development, Culture and Gender Affairs.

Hon. Nigel Carty, who was appointed as one of two government senators, in the previous Cabinet returns as a senator in the Executive branch and has been assigned the portfolios of Minister of Education and Information.

The other government senator is Tourism and International Transport Minister Hon Richard “Ricky” Skerritt. The former West Indies cricket team manger has been attached to the tourism ministry since joining the administration in 2004.

Prime Minister Douglas said Dr. Merchant did not offer to continue serving in his previous post due to dual citizenship issues. He is a citizen of the United Kingdom.

Dr. Douglas also announced that two Labour candidates who failed to win their seats would be appointed to serve his administration as special advisors: Former Cabinet minister Cedric Liburd will serve in the Ministry of Tourism and International Transport; Dr. Norgen Wilson has been assigned a similar capacity in the Ministry of National Security and Immigration.

Labour won six of the 8 seats on St. Kitts. The other 5 seats are shared between three other parties. The Concerned Citizens Movement of Nevis and the St. Kitts-based PAM won two seats apiece, with the other seat going to the NRP.