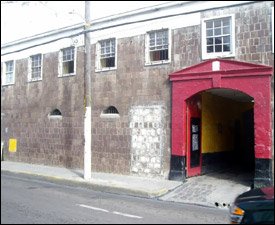 Construction of a new prison facility to alleviate overcrowding and provide improved rehabilitation services has been high on the agenda, Prime Minister Hon. Dr. Denzil L. Douglas has disclosed.

“We have been having discussions with representatives of the British Government and with private contractors and financiers to determine how best to get an arrangement to build a new prison,” said Dr. Douglas, who is also Minister of National Security.

He said the site for the location of the new prison has been has identified and the Cabinet Sub-Committee on National Security has agreed to a model of the new correctional institution.

“We have had the input of various stakeholders including the Superintendent of Prisons, and others involved in the management and supervision of the prison. As soon as the financing arrangement is put in place, we will proceed to the construction of that new facility,” said Dr. Douglas.

He said conditions of overcrowding cannot continue much longer. “We believe that the rehabilitation exercise is working and the support that is required is being given, but we are still very, very much concerned about the overcrowding,” Dr. Douglas said.

The Prime Minister welcomed the assistance from the Barbados-based Caribbean Development Bank (CDB) in financing the construction of the new Juvenile (Co-ed) Rehabilitation Center at Harris’, which upon completion will separate young offenders from the repeat and hardened criminals.

The main prison on St. Kitts was built in 1840. The prison population Wednesday stands at 260 with 222 in St. Kitts and 38 at the Prison Farm in Nevis.