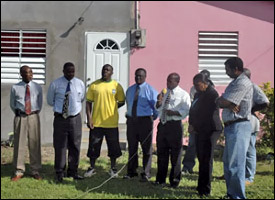 More men will be allocated houses when the 500 homes are completed, Prime Minister Hon. Dr. Denzil L. Douglas has announced.

Responding to a question during the inaugural “Ask the Prime Minister” radio programme on ZIZ on Tuesday, Dr. Douglas said concerns have been expressed in several areas of St. Kitts, including his own constituency, that only females, many of whom are head of households are “empowered in this way.”

“This has been brought back to the Cabinet and we have taken a decision that in the present distribution of the 500 home housing programme, we are going to empower a number of our young men,” said Prime Minister Douglas.

He said the belief is being generated that “if we were only allow our men the challenge of greater responsibility of home ownership, then many more of them probably will be able to go out and find work and then become more responsible citizens in St. Kitts and Nevis.”

Prime Minister Douglas said his governing St. Kitts”“Nevis Labour Party Administration has taken the advice from the public and a policy decision was taken by the Cabinet.