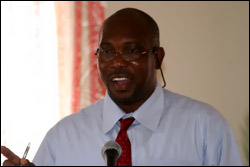 Junior Minister with responsibility for Utilities in the Nevis Island Administration (NIA) Hon. Carlisle Powell, disclosed on Wednesday May 07, 2008, that the Nevis Electricity Company Ltd.(NEVLEC) the island’s only electricity supplier, would be the sole vendor within Nevis for any from of energy harnessed on the island. He said that the move would enrich the Company and safeguard its employees.

The Minister made the remark at an Achievement Award Ceremony for staff members who were trained in First Aid and a basic Computer course, hosted by NEVLEC’s Human Resource Department. The ceremony was held at the Red Cross Building in Charlestown.

“We do that because the people who are employed at NEVLEC should not be out of a job. We do that because we feel that when we negotiate a price which will be a fair price to the developer which would allow them to make some profits and which will allow them to see returns on their investment, we must negotiate a price that NEVLEC would be comfortable with “¦and Mr. Farrell [General Manager of NEVLEC] wants to make sure that whatever price we negotiate when we have a price which we unsell to the consumers too that the consumers are saving money and that NEVLEC is also turning a profit,” he said.

Mr. Powell explained that discussions were in an advanced stage and the NIA had been in receipt of a copy of a final Bill which when taken to Parliament, would govern the management of geothermal energy and were in the process of ensuring that it was reflective of the very best for NEVLEC and the people of Nevis.

The Minister said too, that the NIA had given the matter urgent attention due to the soaring cost of crude oil on the world markets and in keeping with its promise to reduce the cost of living on the island.

The move, he explained, would also place the Electricity Company in a position where it would be able to plan for the future and to provide for its workers through additional training and remuneration.

Notwithstanding, Mr. Powell commended the Company for its efforts to train its employees and said it was one sanctioned by the Administration, since it too had also embarked on a programme of training among the island’s youths.


“Our people are better when they are trained people and so we want to say to NEVLEC that your road and the role you have chosen to train your employees is one that the government is in solidarity with. I say to you that we from the Nevis Island Administration are making every single effort to ensure that NEVLEC in the very near future, becomes a richer NEVLEC and that will be for the benefit of not only the people of Nevis but for the benefit of the employees as well.

“Like NEVLEC, the Government is serious to train our workers not only people who work for government but people generally in the community. We have by our last count 107 persons in universities and colleges in the Caribbean, North America, the United Kingdom and elsewhere who are receiving assistance from government at various levels,” he said.

Mr. Powell also noted that there were a number of training opportunities available which Nevisians had not ventured into and pointed to the nursing programme in Cuba. He urged persons to take advantage of any training opportunity wherever it is available because once one was trained, it remain with them for a lifetime.

While he commended the Company’s Human Resource Unit who hosted the training exercise, Mr. Powell said he that it was clear that NEVLEC was not only in the business of producing power but producing trained personnel.

He also encouraged the participants who had completed the First Aid course to join forces with the Disaster Management Unit where they could also benefit from additional training.

Meantime, General Manager Mr. Cartwright Farrell expressed the Company’s view that once there were trained individuals on the job, it would enhance the chances of accident victims. He said their business involved dangerous situations and therefore the training provided in First Aid (CPR) would prepare the staff to ensure the safety of each other.

Mr. Farrell referred to the Basic Computer course as being no less important to NEVLEC, where records and processes were important and it was critical for the staff to be computer literate

Chairman of the Board of Directors Mr. Ernie Stapleton also acknowledged the importance of training to the Company and its customers.

Mr. Stapleton also commended the Human Resource Department for its efforts to improve the professional standard and to motivate the employees as they continued to carry out their functions within the company.

Head of the Human Resource Department Ms. Maureen Webbe gave opening remarks, a prayer by Ms. Alecia Webbe and the vote of thanks was delivered by Ms. Culeane Parris.