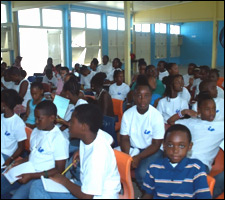 In a very interactive session with primary school students, Jr. Minister with responsibility for Natural Resources and the Environment in the Nevis Island Administration (NIA) Hon. Carlisle Powell addressed the status of the island’s geothermal project and told them that Nevis stood to benefit financially from it.

This came on July 17, at the Charlestown Secondary School’s Auditorium during the Nevis Public Library’s Annual Environmental Awareness Programme. The participants aged nine to 12 years, were anxious to learn more about the project and asked Minister Powell several questions including whether Nevis would make money from geothermal energy.

“With geothermal energy, once you start selling to the other islands, Nevis will be making monies from royalty.  Royalty is just a nice word for a tax.  It’s as simple as that and so (from) all the current that is produced and sold; Nevis will be getting a tax and when you sell the electricity outside of St. Kitts and Nevis the tax is going to be higher so you will be making monies from that.

“The second way that Nevis will be making money is that once West Indies Power Limited (WIPL) would have paid off their initial loans then the Government of Nevis will be expecting to get a share of the profits.  So that if they are making $200 million a year, Nevis expects to get a fair share of whatever monies they make so yes Nevis will be making more money with geothermal energy,” Minister Powell said and expressed his joy in the participants’ interest.

One participant asked what would happen to the Nevis Electricity Company Limited (Nevlec) once geothermal energy began.

Minister Powell advised that the energy from WIPL would be sold to Nevlec which would then be sold to the people of Nevis and St. Kitts.

“Just like they are selling to us now, Nevlec will continue to sell to us and Nevlec will also be responsible for selling down to St. Kitts so Nevlec will look after St. Kitts and Nevis.  We will not be closing down Nevlec as a matter of fact we will be giving them more work to do,” he said.

“A lot of jobs will be created.  Just when they are setting up the plant they had said to us that they will want 120 people to work.  About 80 persons who will be brought in as professionals and then they will be looking for about 40 local persons plus because the electricity is going to be cheaper we expect that there will be more businesses relocating to Nevis to take advantage of the cheaper electricity so we expect that quite a few jobs will be created and that there will be more money in circulation in the economy,” Minister Powell said.

A PowerPoint presentation which set the tone for the session was previously done in several of the island’s primary schools.