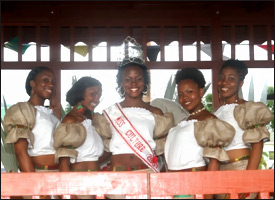 Minister Daniel also spoke of the importance of Culturama and the Miss Culture Pageant to the Festival.

“The Miss Culture Talent Show is our biggest attraction and has been for the recent years and I believe all of us in Nevis look forward with anticipation for a tremendous show this year,” he said.

Chairman of Culturama Mr. Halstead Byron recorded his gratitude to the contestants for entering the pageant.

He also asked the public to participate in the different activities.

“Culturama is for we, Culturama belongs to all of us Nevisians, all of us residents of Nevis and we certainly want all of you to participate in it.  We want you also to be involved in the troupes and to support all the shows that will be on for pre-Culturama activities as well as the official Culturama activities,” Mr. Byron said.

Manager of the Festival Secretariat Mr. Antonio Liburd said he was positive that the festival was going to be an exciting one.

“Inspite of all the difficulties that we have had along the way, I can assure you that we are set and well poised to deliver a quality show in 2008,” Mr. Liburd said.