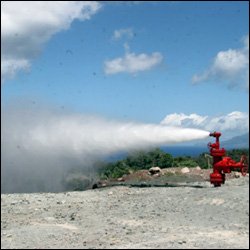 Nevis will play host to a geothermal conference in two weeks at the Mount Nevis Hotel from June 30-July 02, the first of its kind to be held in the Eastern Caribbean.

Permanent Secretary in the Ministry of Natural Resources and the Environment Mr. Ernie Stapleton, told the Department of Information in a recent interview that the event was a united effort between the Nevis Island Administration (NIA), the United Nations Economic Commission for Latin America and the Caribbean (UNECLAC), the Organization of American States (OAS) and the Caribbean Renewable Energy Programme (CREP) ““ German Technical Corporation (GTZ).

He said the Conference would attract key players in the area of geothermal and would come at a time when the world’s focus was on renewable energy due to rising cost of oil and increasing concerns of the effects of climate change.

Mr. Stapleton was of the view that Nevis’ leadership role in the area of geothermal development in the Eastern Caribbean was the reason behind the island’s selection as the venue for the landmark event.

The conference will involve two days of intense sessions and a workshop on geothermal by experts from the Auckland University in New Zealand on day three.

The first session will be on the topic “State of the art of Geothermal Exploration and Exploitation”. It will be moderated by Chief of the Energy Unit at ECLAC’s headquarters Mr. Anlio F. Coviello with presentations from Dr. Peter Malin of the University of Auckland; Engineer in the Comision Nacional de Energia (CNE, Mexico and General Director of the BRGM/EDF’ agency “Geothermie Bouillante” Mr Francois Le Lann.

An “Overview of Geothermal Development Conditions in the Eastern Caribbean”, will be the topic for the second session. It will be moderated by Chief Energy and Climate Change Mitigation Division, OAS Mr. Mark Lambridges with presentations by Dr. Paul Brophy on Geothermal resources and Mr. A. John Armstrong on Policy and legal framework.

Session three will deal with the topic “Situation and Perspectives of Geothermal Development in Eastern Caribbean Countries”. The moderator will be Minister of Public Utilities, NIA Hon. Carlisle Powell, with presentations from the governments of Montserrat and Dominica.

Later in the session the second moderator will be CRED/GTZ representative Mr. Thomas Scheutzlich and presentations will come from the Governments of St. Lucia, Grenada and St. Vincent and the Grenadines.

Following after a break participants will be given the opportunity to learn from Gisli Palsson of the Icelandic International Development Agency (ICEDA) of the training opportunities available at the UN University of Iceland.

A round table discussion on the topic “Challenges and Opportunities for Geothermal Development in the Eastern Caribbean: Proposals for a New Agenda” will be moderated by Mr. Manlio Coviello and will be opened to delegates and participants.

The second day of the Conference will be dominated by the geothermal development in Nevis through the eyes of the private sector partners.

Session four “Geothermal Exploration and Development on Nevis: A Private Sector/Investor Perspective” will be moderated by General Manager of the Nevis Electricity Company Mr. Cartwright Farrell. Presentations will be made by Mr. Greg. DeGannes on the “Effects of Geothermal on Nevis and the Caribbean” and another by Mr. Joe LaFleur, Dr. Peter Malin and Mr. Bobby Tinsley on “Geothermal Exploration: The Nevis Case”.

A third on “Nevis Geothermal Plant” by Mr. Tom Ettinger, Mr. Jim Beverly, Mr. David Mendive and Mr. John Roos while another on “Nevis and St. Kitts and Caribbean Interconnection by Cable will be presented by Mr. Domencio Gerace.