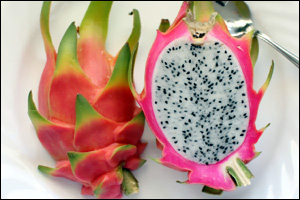 The Department of Agriculture on Nevis in conjunction with the Taiwan Technical Mission at Cades Bay, hosted a one day workshop on Pitaya Production on Wednesday June 6th , in an effort to introduce a new variety of exotic fruit to Nevis.

The workshop which was held at Cades Bay targeted farmers and the Department’s extension workers introduced and exposed participants to the technique, knowledge, benefits and the possible commercial production of Pitaya.

In brief remarks Permanent Secretary in the Ministry of Agriculture Dr. Kelvin Daly encouraged members of the public to plant a tree of the fruit in their backyard garden since it took up little space and was nutritious.

“Anytime you see a red fruit like this, you think of one thing, antioxidants, vitamin A, Vitamin D, Vitamin C. These are things that give you long life and good health. The nutrition part of it is the most important part of it. I think we should be moving away from a lot of the concentrates ““ orange and others. We have fresh fruit.

“The beauty about this plant is it grows year-round unlike our seasonal plants which grow only certain times in the year but this fruit you can have it year round right in your garden. It takes very little space and you can reach out and pick one and have it for breakfast, lunch or dinner. It is an excellent crop”¦ I would encourage you and those who will be vviewing the programme later, to try and get your hands on one of the plants, so you can have it in your backyard as part of your programme to improve your health lifestyle,” he said.

According to Dr. Daly, the Department and Ministry of Agriculture were pleased to help make the fruit available to persons on Nevis. He said the Pitaya Fruit (also called Dragon Fruit) was similar to the cactus fruit but was much bigger and was not prickly.

The Permanent Secretary of Agriculture said he had already sampled the fruit and had fallen in love with it at first bite and recommended it to everyone.

“I myself have tried the fruit and I fell in love with it at the first bite. It is an excellent fruit. The consistency is like kiwi with a richer flavour. It makes a wonderful smoothie and I have used it in my own establishment.

“Those persons who are weight conscious or health conscious which we should all be at this point in our lives then this workshop here to propagate and distribute these types of fruits on the island of Nevis can only help,” he said.

Meantime, Acting Director of Agriculture Mr. Randy Elliott described the workshop as timely and said it was testimony to the work being done by the Ministry of Agriculture and the Taiwanese Mission in St. Kitts and Nevis.

“Some of the work that we have been doing over the years is fruit tree technology in terms of propagation; sweet potato production and we are again here today we have the Pitaya propagation.

“Basically, Pitaya is one of the exotic fruits coming out of Central America and Asia and it is one of the fruits that literature describes as one of the most nutritious exotics fruits around,” he said.

According to Mr. Elliott, the fruit was used elsewhere in the world in the fight against cancer, since studies suggested it naturally helped to reduce free radicals in the body. He said it was also used to fight against obesity especially in women.

Mr. Elliott was hopeful that the technology associated with Pitaya would spread throughout the island and he looked forward to seeing a plant in every household in the future.