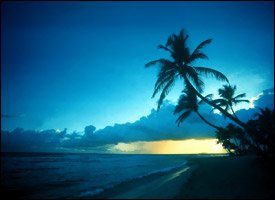 A destination shoot of Nevis’ geothermal site, as well as an interview with the Hon. Joseph Parry the Premier of Nevis and the West Indies Power (W.I.P) C.E.O, Mr. Kerry Macdonald were the highlights of a tour done by a North American media/ travel production company on Monday.

The Escapes Group produces media to stimulate consumers to travel and fully experience what the destination has to offer.  The film collected during the shoot will be used for up and coming programs on NBC, namely Destination Green, Caribbean Escapes and Luxury Travel, the programs will be part of the Fall 2009 line up.

During the interview, the Premier of Nevis spoke on the recent reconstruction of the Four Seasons Resort in Nevis, Geothermal energy and the island’s Tourism Sector.  After the interview with the Premier, Escapes Group producer, Glen Harris remarked that he found Premier Parry to be very articulate, fluent in his answers and extremely focused on getting his message across.

Meanwhile, CEO of WIP Mr. Kerry MacDonald expounded on the fact that providing 100 percent renewable energy to Nevis is possible and it will bring jobs, cheaper electricity and financial gain for Nevis, once the island begins to export geothermal energy to their neighbors.

The Escapes Group trip to Nevis was supported by Nick Douglas, owner of Botanical Gardens, The Nevis Tourism Authority, Mount Nevis Hotel and a host of other Tourism stake holders.