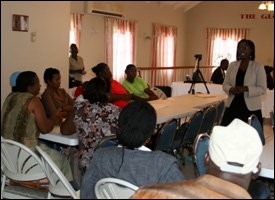 Teachers of the Special Education Unit on Nevis were publicly commended for their deep and abiding dedication to the island’s children with special needs.

Principal Education Officer Mrs. Jennifer Hodge gave the public accolade to the teachers at a recent Organization of American States (OAS) sponsored workshop for Parents of Special Children at the Red Cross Building in Charlestown.

The workshop was Phase 2 of a Curriculum Development programme designed to raise the parent’s awareness of the curriculum. The theme was “Empowering ourselves for the Journey”.

“I have the greatest respect for those teachers. They are made of a very special mould and they are endowed with caring and love for these children and I must commend them for their wonderful job that they are doing,” she said.

Mrs. Hodge also had words of commendation to the parents of the special needs children and hailed them as unsung heroes on the island of Nevis as they continued to mount what she described as “insurmountable barriers” for the success of their children.

She singled out “Beulah” who she said had earned her the distinction of being an honorary parent at the Unit.

Mrs. Hodge registered her hope that the workshop would raise the parent’s awareness of the curriculum and offered support in their roles as the primary care givers to their children.

“Parents you have unique information about the development, nature and the needs of your children and thus you are recognised as Very Important Partners, you are VIPs in your children’s education,” she said.

The Education Official said it was understandable that parents of children with special needs were fiercely protective of your children because they have had to deal with negative social attitudes towards their children for far too long.

Notwithstanding, she hastened to add that things were slowly improving in that regard on Nevis and would continue to do so with their corporation and support.

“I am happy to note that in 2009 parents are more willing to take the children out of the closet and to access the appropriate education provided for them and to which their children are entitled.

“You must be prepared to push for the best for your children and by your persistence show the society they are whole people notwithstanding they may have some challenges some from mild to severe and others from single to multiple but who does not have challenges? Who does not? In the mainstream we do have children with learning disabilities”¦ and these are challenges for normaal children and they deal with those everyday,” she said.

Mrs. Hodge expressed the view that the Ministry of Education and the Parents shared a common goal to make the children functional and productive citizens on St. Kitts and Nevis.

She said all children had the ability to learn once the environment was adapted in ways that met each ones learning needs.