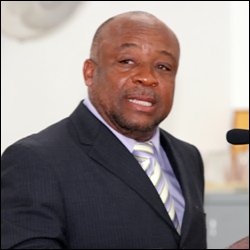 A Bill designed to facilitate good governance and will allow for the more efficient functioning of the Nevis Solid Waste Management Authority, was one of two Bills which passed unopposed in the Nevis Island Assembly on Monday.

“This reflects a deconcentration of power and a devolution of authority and it allows the Ministry of Health to have a more independent assessment of the Authority,” The Health Minister said after the Bill received safe passage.

Mr. Daniel explained that the new legislation served to eliminate any prospect of the Permanent Secretary (PS) in the Ministry of Health to hold the position of Chairman of the Solid Waste Management Authority.

“What we are seeking to do here, is to give the Authority some leeway so that it is not constricted by the presence of the PS, who is perceived in our democracy, naturally, to carry the sentiments and ideas of the Minister of Health. So this allows someone not directly linked to the Ministry to give direction to the management and operation of the facility,” he said.

The old legislation called for the Authority to consist of five members of which the Permanent Secretary would automatically serve as the Chairman.

However, the new legislation makes provisions for three members and the chairman’s position would no longer be held by the PS.

Mr. Daniel explained that the amendment guarded against the long arm of the political process to ensure that it would have no involvement of the operation and management of the Authority.

“There are several persons outside of the Ministry of Health who can give the kind of leadership and direction to this and it is very important for us to remove the political directorate as it were from the management and operation of the Solid Waste.

“Of Course Madame President, this is a very important entity because as we can see, the government through the authority has invested heavily and also is making very good strides in the operation and management of the facility,” he said.

The Health Minister also registered his hope that similar measures would be taken in relation to other statutory bodies on Nevis.

“We hope in the future that all our statutory bodies are removed from the direct influence as it were in terms of policy and direction so closely removed from the political directorate,” he said.