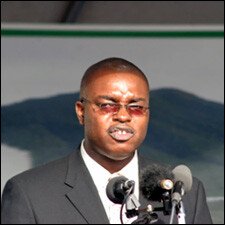 The goal of USTDA’s Clean Energy Exchange Program for the Americas is to familiarize leading Latin American and Caribbean energy sector officials and project sponsors with U.S. clean energy technologies through a series of six reverse trade missions to the United States.

As part of the exchange program, Mr. Stapleton and Mr. Farrell will meet with their counterparts of Latin America and the Caribbean in a Regional geothermal energy tour of Washington D.C and Reno, Nevada scheduled from January 22-29 2011.

Mr. Stapleton said the week-long event will include discussions on geothermal projects taking place throughout Latin America and the Caribbean.

According to information from the USTDA, each reverse trade mission in this series will include meetings with U.S. industry, financial institutions and U.S. government agencies to exchange information with regard to the commercial, technological, regulatory and financial aspects associated with clean energy project development.

The reverse trade mission series supports the Energy and Climate Partnership of the Americas that was announced by President Obama at the 2009 Summit of the Americas.

The USTDA initiative comes at a time when energy-hungry Caribbean nations are faced with spiraling energy costs as world oil prices skyrocket to historic highs.