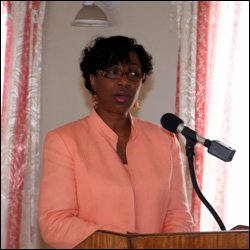 Health care providers on Nevis prepared for the introduction of an initiative called Initiated Testing and Counselling (PICT) for HIV/AIDS. They were introduced to the programme’s guidelines during a workshop at the Red Cross Conference Room on Thursday.

Permanent Secretary in the Ministry of Health on Nevis Mrs. Joslyn Liburd said at the start of the one day workshop that the Pan American Health Organisation (PAHO) backed public health strategy which was tailored toward the intensification of HIV testing and counselling in the Region, was one fully endorsed by the Ministry.

“By utilising the strategy of routinely offering an HIV test to a client regardless of the service he/she is seeking at the hospital or health centre, it is hoped that the number of HIV tests conducted annually will increase significantly and individuals would know their status early and seek treatment, care and support and thus prevent the spread of the disease.

“It feeds into our goal of increasing the number of HIV tests conducted annually by 5 percent in 2009,” she said.

According to Mrs. Liburd, in 2008 a total of 1210 tests were conducted (665 at the Alexandra Hospital and 545 at the private Avalon Lab). There were three positive cases that year.

The Ministry of Health had also introduced the National Testing Days which have been held every December over the past two years.

The workshop on Nevis was the third step in the training process which will continue with follow up courses from March to May in both Nevis and St. Kitts. The Nevis courses will be held on April 15 and 16th.