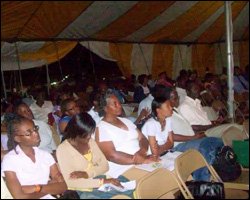 Last Thursday, Premier of Nevis, Hon. Joseph Parry welcomed delegates from across the region to the North Caribbean Conference of Seventh”“Day Adventist Youth Leaders Spiritual Retreat. The opening ceremony was held at the Hardtimes play field in Gingerland. The special event was carried under the theme, Reflecting His Image Illumines the Path.

The Premier was introduced by Pastor J. Wilmoth James, who carefully outlined the many sports organizations in which Mr. Parry had been involved; and the community minded positions he has held throughout his life.

“It is indeed an honour for me to stand here tonight, welcome all of the persons involved in making this evening possible and be reminded of all the activities I have been involved in over the years. It has always been very important for me to be a part of the community and to make a difference, exclaimed the Premier.”

During his presentation, the Premier spoke on the island’s dilemma of misguided youth and crime. He said that as a community, we need to take back our young people.  He emphasized that this is an opportunity for the Church to reestablish itself in Nevis and throughout the Caribbean.

“While the young girls are excelling in their education, receiving good jobs and becoming very ambitious, the young men are lagging behind! The community has a need to make it known that we will not tolerate their bad behavior or their anti-social attitude. It is important that we demonstrate that we are not afraid of these young men and we do not accept this kind of negative conduct on our islands,” expressed Mr. Parry.

The Premier continued by stating that as the Caribbean islands grapple with crime and the world recession remains on going, there are still good things happening.  He indicated that a few months ago a poverty assessment was conducted and published on Nevis.

According to the Premier, the link of communication is important and should be formed between the islands during the retreat.

“Be a part of the revolution to advance our nations. Let us exchange views to build these Caribbean islands, because despite our diverse experiences we are one people,” stated the Premier.

On discussing the work of the Adventist Youth, the Premier applauded the efforts of the Seventh-Day Adventist Church for their on-going involvement with Social work, healthy eating, and Education.

While expressing his pleasure at having the conference staged on Nevis, the Premier said, “this is a great moment for all of us”¦it gives us hope and an improved belief in the faith of Christianity.”