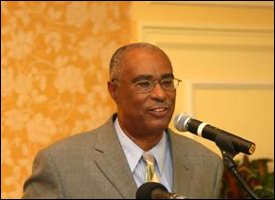 “The Nevis Island Administration continues to assert close co-operation between the private and public sectors to advance business development and the continual strengthening of the economy,” said Premier Parry at the Second Annual Consultation on the Economy of Nevis.

Mr. Parry was at the time delivering the feature address at the one day consultation under the theme: “Facing the Challenges of a small Nation State through the Innovative use of Limited Resources,” held at the Four Seasons Resort, Tuesday, 7th October.

Mr. Parry said that the coming together and sharing of ideas by the private and public sector in Nevis can help chart the course for the coming years of activities.

Permanent Secretary in the Ministry of Finance, Mr. Laurie Lawrence, in his opening remarks, reminded the gathering that the Hon. Joseph Parry in his 2005 election manifesto indicated that one of his top priorities is to consult frequently with the people of Nevis on important social, economic and political issues affecting the island.

During the consultation chaired by Permanent Secretary, Mr. Ernie Stapleton, brief remarks were made by Deputy Prime Minister of St. Kitts and Nevis the Hon. Sam Condor. Mr. Condor said he was very pleased at being invited to participate in the Sister Isle’s National Consultation of the Economy, and at being able to share in the critical dialogue of the proceedings, its frank exchange of views and ideas, as well as the exploration of strategies focusing on the island’s economy.

The afternoon session ended with a question and answer period in which the participants split up into four groups discussing Tourism, Finance, Health and Social Services. The groups outlined the way forward in establishing the priorities of Nevis, and the resources needed for a successful deployment of all the factors of production which would redound to the island’s benefit.

Topics of discussions were, “˜Economic Management and Adjustment in Small Nation States to meet challenges of the Global Economy’, “˜Overview of Fiscal Performance, Debt and Tax Reform’ and “˜Alternative Energy’.