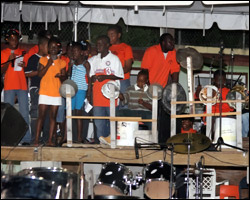 Premier of Nevis and Minister of Education Hon. Joseph Parry urged students on the island to continue their involvement in music and cited that it would keep them away from idleness and trouble.

Mr. Parry made the call on May 28, 2008 at Musical Expose 2008 which was held at the Netball Complex in Charlestown. The event which was created by Music tutor the late Mr. Herald Sutton in 2006 was organised by the Department of Education. It featured performances from every school on the island and showcased the student’s musical talent and demonstrated the role of the Music Department in their development.

“If you love music it helps to save your mind it relaxes you and it makes you a better person. I believe as well that as we are growing up that young people should not just focus on academic education but to be roundly educated. You need to do a number of things including sports and leisurely affairs and certainly music.

The Minister also thanked the music tutors for their hard work.

Meantime, Principal Education Officer on Nevis Mrs. Jennifer Hodge in an interview with the Department of Information on May, 29, 2008 summed up the performances as “fabulous” and of particular delight were the steel pan renditions.

She also pointed to the performance of the Charlestown Primary School’s Iron Band. She said the school had capatilised on the craze and was the first to have an iron band.

“They did great they sang the popular “Focus” calypso and adapted it to the Test of Standards and fractions and it was ingenious, clever,” she said.

Notwithstanding, Mrs. Hodge said though she was gratified with the performances, she was disappointed with the participation of parents. She explained that the Education Department had taken the initiative to produce events that involved the parents and the Music Expo was designed to engender parent’s participation.

However, she urged them to give the children the necessary encouragement towards music. She said male students who were not academically inclined did excellent work in music.

The Principal Education Officer explained that the Department was trying to develop a well rounded child through holistic education.

“We are trying to develop a well rounded child through holistic education, music, drama, sports combined with academics, that makes a whole child. We encourage parents to see it that way. All will not excel in academics, you can have a child making a living from music. The music industry is a flowering industry and this is one way a child could be self employed and develop a career,” she said and added that the music programme in the school’s curriculum could help to create future entrepreneurs.

The Exposition featured performances with the recorder, singing, drumology, string band, piano and drums, recorder and guitars. The tutors of the Music Department also performed.

Also present at the Exposition were Deputy Premier and Minister with responsibility for Youth Hon. Hensley Daniel, Hon. Robelto Hector, and Hon. Carlisle Powell from the Nevis Island Administration, and Education officials.