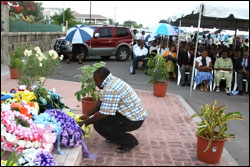 Mourners At The MV Christina Memorial

Premier of Nevis the Hon. Joseph Parry, urged survivors and eligible relatives who had perished when the MV Christina ferry sank 37 years ago en route to Nevis, to claim from a Provident Fund that had been set in their honour which still held millions of dollars.

He made the call on Wednesday August 01, 2007 while he addressed a gathering which included a number of survivors and surviving relatives during a memorial service in Charlestown to mark the disaster’s 37th anniversary. On August 01, 1970 at approximately 4:10pm the MV Christina sank one mile off Nag’s Head, St. Kitts en route to Nevis. Two hundred and thirty three persons perished but there were 90 survivors.

“I am told that there is a Provident Fund that is associated with the Christina Disaster where $8million is still held somewhere in this fund. It is there because many survivors did not bother claim on behalf of the persons who they lost. I am now saying to you the money is still there, it is not too late.

“Many of us who are here are survivors, many of us here are families of those who were lost let us think about it, let us see if we have the right to make a claim. Don’t make a claim if you do not have any right to claim. Discuss it with others, make sure you have a right to claim and go and make your claim because the money is there and I am quite sure that you can put that money to great use,” he said.

The Premier noted that during the disaster Nevis had lost a big chunk of its civil servants, the farming community and hucksters who travelled to St, Kitts weekly, many of whom were women who travelled every Friday to make a living for their children and grand children.

He recalled the shock that had gripped Nevis at the time of the disaster which he said affected every corner of the island.

“I don’t know if we realise when the Christina went down and the shock hit the island of Nevis, how many persons suffered as a result. People had nervous breakdowns, people never ever recovered from that experience but even our farming situation seemed to have lost momentum and even today, we have not regained that momentum. So the loss was not only in terms of human capital but it was also counted in economic losses,” he said

Mr. Parry was hopeful that after 37 years that the persons affected had been able to recover and move on with their lives.