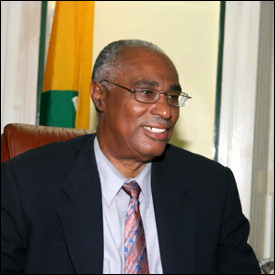 Nevis’ Premier Parry On His Two Years In Power

Premier of Nevis, the Hon. Joseph Parry addressed the Nation Thursday in celebration of the momentous occasion when the people of Nevis returned the Nevis Reformation Party (NRP) to office on July 10th, 2006.

“Governments are appointed to serve the people in their best interest. You the people elected us on the basis of the programmes we promoted and articulated in the Peoples Agenda.  Today, I report once again of the stewardship of the Nevis Reformation Party on behalf of the people of Nevis”.

In discussing the achievements of the early days of the NRP, Premier Parry outlined the success of the party with such advancements for Nevis as: Electricity for the island of Nevis, the provision of Roads, Water and Ports under NRP between 1983 and 1992.

Today almost twenty five years after first coming to power, the NRP has embarked on another landmark event by promoting geothermal on the island.

“People in the Caribbean will say geothermal did for Nevis what oil did and continues to do for Trinidad and Tobago and what Tourism did for Barbados. The economic potential for geothermal is so huge, that for decades its impact will continue to reverberate around this region.”

On Tuesday, July 8th, 2008 the geothermal bill was passed into law in the Nevis House of Assembly. Premier Parry stated that in years to come that day will be remembered as the beginning of a major economic change on the island Nevis.

The impact of geothermal for Nevis will be positive, as revenue from sales of the supply of energy to regional islands will manifest in increased direct revenue to Government. Another positive aspect of geothermal will be the removal of fuel surcharge, therefore domestic consumers and businesses alike can anticipate lower prices on electricity on Nevis.

“It will attract industries in search of cheap electricity and it will create cascading industries that will provide work for our people.”

At the first geothermal plant which will commence construction later this year, forty jobs for locals will be provided directly while eighty persons from overseas will be involved in the construction of the plant. “As a result of the plant, more jobs will be created and millions of foreign exchange will be injected into the economy,” said Premier Parry.

On the subject of education, Premier Parry outlined the fact that ninety-three new and continuing Nevisian students are pursuing education at College and University level overseas, courtesy of grants from the Nevis Island Administration. A sum of $1.2 million has been budgeted for this year and will be increased since $1.5 million was spent last year on higher education alone.

While Premier Parry addressed education, he congratulated all the primary schools for their great effort in the Test of Standards Examinations, “I congratulate Mr. Tyler Jay Martin for over”“all best results and Miss Savitri Savran for being the most outstanding girl student.  I must also congratulate Yunoka Flemming and Kalea Clarke for their victory over all the Caricom countries in the recently concluded Caricom quiz.”

The NRP led Nevis Island Administration has continued to train persons in Nevis and abroad. The singularly most important initiative is a programme presently involving seventeen young Nevisians on a three- month course in Trinidad.

“We have a progress report of these students and all of them have done well. Many of them have been outstanding. They were the pioneers who served Nevis.”

On overseas medical attention, Premier Parry referred to the case where a baby was saved by the timely intervention of the government. Deputy Premier, the Hon. Daniel was instrumental in accessing the best children’s clinic in the United States and today a healthy boy child has returned to Nevis.

The Premier also talked about Agriculture declaring that in 2006, the abattoir provided 106,000 pounds of meat and in 2007 the number increased to 127,100 pounds or 17% more.  Major success has been reported in mutton production, pork and beef.

There has also been a major surge in cotton production; for the year so far, a total of 28,500 pounds of lint seed cotton has been produced.

In relation to New Found, it was announced that the Government will soon receive title to 170 acres at Pinney’s from New Found Development. “I am assured by the Legal Adviser that the money to clear the debt to government from New Found has been wired to the Government and should be in the account of the Housing and Land Corporation.

Continuing his report on the islands successes over the past two years, The Premier spoke about Brown Hill Communications, Nevis Ltd. The company is owned by Bell Canada and presently employs twenty-one persons. By the end of the year the number of employees will reach 100. All front line workers will be paid over $2,000 monthly and the workers will enjoy health and other benefits.

Finally, the Premier talked on crime, urging young people to seek training, work with the government, be able to place themselves in a position to earn an honest living, stay in school and stay away from crime.  The Premier indicated that earlier Thursday, his Cabinet met and held discussions with the Leadership of the Police stationed in Nevis.  He promised to support the Police in every way possible as they work to reduce the incidents of violent crime on the island.

The Hon. Joseph Parry concluded his address by encouraging the general public to work towards maintaining Peace, Progress and Prosperity on Nevis.