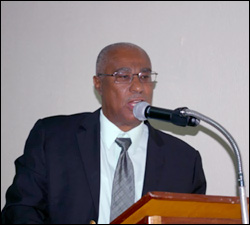 Premier of Nevis, Hon. Joseph Parry told over 100 attendees of the Town Hall meeting that “Nevisians must be in charge of Nevis.”  He made the statement on Sunday at the PMIA Hall on Backstreet, during a meeting with Nevisians residing in St. Maarten.

The Hon. Joseph Parry said that for the first time in Nevis’ history, a local person is the CEO of the Nevis Tourism Authority, a local is the manager of the Nevis Electricity Department, and in the Nevis private sector a local is in charge of operations of TDC.

“While I was in Anguilla I was very impressed to see that Anguillans own hotels, restaurants and many of the businesses on the island, this is what I would like to see for Nevisians in Nevis,” said the Premier.

He also noted that his Nevis Reformation Party (NRP) led Administration has implemented policies which would empower Nevisians including the yielding of 170 scholarships for students seeking a University education and the granting of duty-free concessions given to small business owners.

“It is very important that young people on Nevis see their own in key positions on the island.  I believe this will motivate them to work hard, get  a good education, strive for top positions or have the ambition to have their own business,” commented the Premier.

During the meeting, the Hon. Joseph Parry told the audience that he understands that they reside on another island but asked, “Isn’t it important that Nevisians hold key positions in their place of birth?” The audience answered with a resounding, “yes!”

The Premier concluded that Nevisians have been a people who have sought employment and residency outside of Nevis but, “now,” the Premier said, “Is a time when Nevisians can be a major player in their own country.”