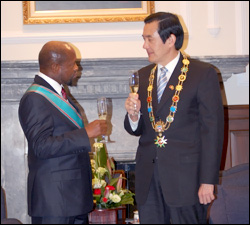 The recent one-week official visit to the Republic of China on Taiwan (ROC) has been described by Prime Minister Hon. Dr. Denzil L. Douglas as “highly productive.”

During his weekly radio call-in programme “Ask the Prime Minister” on Tuesday. Dr. Douglas said the visit afforded him the opportunity to “solidify the long-standing relationship through direct talks” with President, His Excellency Ma Ying-jeou; Premier, His Excellency Wu Den-Yih and Minister of Foreign Affairs, His Excellency Timothy C.T. Yang.

Dr. Douglas said the visit also afforded his delegation to “observe up close and in great detail the type of training that Taiwan provides to those members of its population who are positioned to assume positions of leadership in its hospitality industry; to continue pursuing the interests of the Federation as far as renewable energy, in general, and solar energy, in particular, are concerned; gain first hand insights into the horticultural component of Taiwan’s agricultural sector in order that a keener understanding of their best practices may be used for the benefit of our Federation and study more closely the programmes and infrastructure that Taiwan has put in place to preserve its natural heritage, both for the psychological enrichment of the Taiwanese people, and because of the importance of this to Taiwan’s tourism industry.”

He noted that on the subject of solar technology his delegation which included Minister of Energy, Dr. the Hon. Earl Asim Martin visited Motech Industries, the largest solar cell manufacturer in Taiwan and one of the top ten manufacturers worldwide.

“My interest in Taiwan’s approach to training in the area of hospitality yielded very important insights as a result of our tour of Taiwan’s National Kaohsiung University of Hospitality and Tourism and our in-depth discussions there,” said Dr. Douglas.

The Horticulture Department at King Car Biotechnology Industrial Company made it possible to see up close their horticultural approach and thrust, and the site visit to, and meetings at, the Lanyang Museum provided valuable insights into their approach to the preservation of their natural heritage.

“All of this was done, not so that St. Kitts and Nevis would replicate exactly what other countries are doing, but to compare and contrast other approaches with approaches that we have either tried here, or are considering putting in place, so that the optimal choices can be made in the interest of our Federation,” said Prime Minister Douglas

He said he was able to secure a commitment from the president of Motech Industries to train Kittitians and Nevisians in this increasingly vital area with the push forward with the renewable energy agenda.