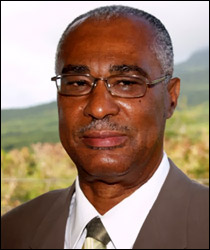 Premier of Nevis, the Hon. Joseph Parry returned to the Federation on Sunday, May 25th from St. Lucia, where he attended the organization of Eastern Caribbean States (OECS) forty-seventh meeting.  The meeting was held at the St. Lucia Bay Gardens Resort in Rodney Bay from May 23- 24, 2008.

While attending the two-day meeting for Heads of Government at OECS level, the Premier engaged in discussions, which he has described as “of paramount importance.”  Among the more pertinent issues were discussions on the economic union of the OECS.  Premier Parry indicated that during the discourse, Heads of Government examined proposals in an effort to better understand the implications and to make sure that the political power remains in the hands of the Heads of Government, rather than be “transferred to bureaucrats.”

Additionally, there were serious discussions on food prices and production levels on the OECS and Caribbean countries. Recently, the Federal Government and the Nevis Island Administration (NIA) have removed dues and taxes from some basic food items to make life easier for residents of the Federation.

Another item of importance was the possibility of a soft loan for development of courthouses in the Eastern Caribbean.  “In a discussion with Prime Minister Douglas, we were looking at police stations as well; so this program can give us the opportunity to improve the Newcastle Police Station, to provide a new brand Police Station in Cotton Ground and upgrade the one at Charlestown.  Comfortable offices and proper sleeping accommodations will be sought for the men and women of the police and fire services.

The meeting has been described by the Premier as being an overall success; and he believes that being able to attend such meetings puts him in a better position to more aggressively highlight the issues pertinent to the island of Nevis.