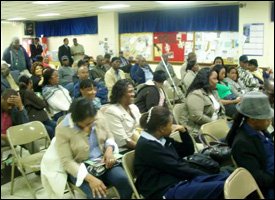 Premier of Nevis, the Hon. Joseph Parry, met with Nevisians residing in New York to discuss a number of programs, projects and the way forward for the island of Nevis. The meeting took place at the St. Luke’s Church in Bronx, New York on Thursday.

The Premier was accompanied on the trip by Deputy Premier in the Nevis Island Administration (NIA), the Hon. Hensley Daniel.

After being introduced by the chairman, Mr. Tony Sadio, Premier Parry began his discussion by informing the audience on geothermal and the benefits that the natural energy source will have for Nevis.

“Geothermal will bring industries to Nevis, more job opportunities, cheaper electricity and put more money into the treasury. I ask Nevisians to support the geothermal project as it is not for any particular political party but it is for all the people of Nevis,” commented Mr. Parry, to which he received a rousing applause!

The Hon. Joseph Parry stated that some people are concerned that the exploration of geothermal will cause earthquakes. The Premier assured those in attendance that there has been research done on the matter and it has been confirmed that digging will not cause any earthquakes.

While discussing the issue of royalties from geothermal, Premier Parry noted that there has been some concern on the five percent amount being given to Nevis by West Indies Power (WIP).  He informed the crowd that US$10 million has gone into the development and exploration of the energy source in Nevis and it was noted by the Premier, that the island has not put a single penny into the venture.

“In any business it is the risk taker that makes the bigger financial payback. One can not argue about the five percent if geothermal was left undeveloped,” remarked Premier Parry.

On the reopening of the Nevis Four Seasons Resort, the Hon. Joseph Parry affirmed that on the 5th of June, over seventy persons from Mexico will arrive on Nevis to start construction on the refurbishment of the five star resort.  He said that the Mexican workers will arrive with health papers and will be quarantined and examined locally for two days before beginning work. He also said that a number of local workers will be employed at the resort to assist during the construction process which would include extra long hours.

The Premier asked the audience to tell their friends and relatives in Nevis who would be working on the refurbishment, to support the project by being willing to work the long hours so that the hotel can open by November 1st.

Meanwhile, Mr. Daniel spoke on the recent results on Poverty Assessment Statistics in Nevis which was conducted by the Caribbean Development Bank (CDB). It was noted that Nevis has a high quality of living with 93 percent of the population having running water in their homes, 90 percent with electricity, 90 percent owning their homes, 60 percent with clear title, 93 percent of Nevisian children are in school and 100 percent have access to health care.

The Deputy Premier also talked about a newly developed reading program where parents would support their children by reading books with them. It was noted that the Australian Government is supporting Nevis in this reading venture.

As Minister of Sports, Mr. Daniel discussed the much talked about Drag Race strip in St. James’ Parish.  He stated that the Drag race has built up a great boost to the economy of Nevis as guest houses, local vendors, car rental services, the Seabridge and Tourism on a whole has witnessed advancement, since the drag raceway was constructed.

With a strong Social Work background, Mr. Daniel talked about his interest in the mentoring program developed by his Social Transformation department called Nevisian Pearls which would deal with the support and development of young women. He also discussed his government’s service to the elderly and training for young men in plumbing, electrical services and blue printing.

“The Nevis Reformation Party led Government is working in the interest of the people of Nevis,” remarked Mr. Daniel.

During the question and answer period a number of people asked questions on various issues but one question that stood out was,” Is the Commission of Inquiry (COI) a dog and pony show?”

The Premier immediately answered that the COI is important and a very stern message must be sent, that people in government be transparent and honest now and in the future of Nevis Government.

With great participation from the audience and positive feedback about the projects and programs seen in the Action magazine which was distributed at the beginning of the meeting, it must be concluded that the Town Hall meeting was indeed a huge success.