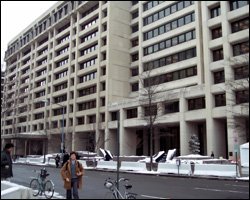 The Washington-based International Monetary Fund (IMF) said Monday that while the global downturn and heavy debt burden are likely to weigh heavily on near-term growth, the economy of St. Kitts and Nevis is well placed to achieve strong growth over the medium term provided that the authorities continue to implement appropriate policies and press ahead with the reform agenda.

The Executive Board of the International Monetary Fund (IMF) which concluded the Article IV consultation with St. Kitts and Nevis on May 15th also welcomed the commitment of the Government of St. Kitts and Nevis to restore fiscal and debt sustainability, as evidenced by the achievement of four consecutive years of large primary surpluses, contributing to a substantial lowering of the public debt ratio.

In its statement, the IMF noted that on the heels of several years of robust growth, the economy of St. Kitts and Nevis has weakened markedly in the wake of the shocks from the global recession, the collapse of the Trinidad and Tobago-based CL Financial Group, and the devastating impact of Hurricane Omar.

Near-term growth prospects have deteriorated markedly in the wake of the global recession, the collapse of Trinidad-based CL Financial Group, and damage from Hurricane Omar, further complicating an already difficult situation. The island of Nevis, in particular, has been badly affected by Hurricane Omar which passed the region in October 2008, with the island’s largest hotel likely to remain closed during 2009 due to damage from the hurricane’s storm surge. Thus, after growing by 3.2 percent in 2008, St. Kitts and Nevis’ real output is projected to contract by 1.2 percent in 2009.

“Risks to the outlook are clearly on the downside, as strains from the global crisis have become increasingly evident in the local financial system, including through extensive cross-border linkages with the troubled CL Financial Group. Higher food and fuel prices led to a pick-up in inflation in the first ten months of 2008, peaking in October 2008 at 8.3 percent before moderating to 7.6 percent at end-2008. Inflation is projected to ease further in 2009 on the back of lower oil prices,” said the IMF.

It added that the government’s commitment to debt reduction resulted in a fiscal primary surplus in 2008″”at more than 5 percent of GDP””for the fourth consecutive year, helping to lower the public debt ratio (as a percent of GDP) by 20 percentage points over the past four years.

“However, the primary surplus is projected to decline to 2½ percent of GDP in 2009, largely due to an expected drop in revenues without concomitant cuts in expenditures, and the debt ratio is expected to trend up again. With a debt ratio at more than 175 percent of GDP by end-2008, debt service comprises nearly a quarter of government revenues, leaving no space for fiscal policy to respond to the adverse shocks,” said the IMF statement, adding:

“Fiscal consolidation will be important not only for restoring debt sustainability, but also for supporting competitiveness, maintaining stability, and underpinning the Eastern Caribbean Currency Union (ECCU) quasi-currency board arrangement.”

The IMF noted that the financial sector vulnerability stems from banks’ continued high government exposure and a needed further strengthening of supervision of the nonbank sector.

“Moreover, should the global slowdown be prolonged, the adverse impact could spread to the banking sector through a rise in nonperforming loans. The insurance sector, meanwhile, is grappling with the fallout of CL Financial Group’s problems,” the IMF Article IV said.

It noted that the authorities have made a request for an Emergency Natural Disaster Assistance (ENDA) purchase equivalent to 25 percent of quota (SDR 2.225 million). Although Hurricane Omar struck in October 2008, the full impact due to the indefinite closure of a major tourism resort on Nevis, has been slow to evolve.

The authorities are attempting to address the effects of the hurricane, but face severe financing constraints. Fund financing is expected to partly offset the balance-of-payments impact, estimated at 3½ percent of GDP due largely to a decline in tourism receipts.

Given the continued large financing needs, the IMF Directors encouraged the authorities to push ahead with their goal of achieving even larger primary surpluses over the medium term and underscored the need for strengthened expenditure control, together with further structural fiscal reforms including, most critically, the implementation of the VAT.

They also underscored the importance of fiscal consolidation in supporting competitiveness and underpinning the ECCU’s quasi-currency board arrangement. Although the real effective exchange rate is broadly in line with fundamentals, they noted that maintaining competitiveness in the context of relatively high wage levels and a highly competitive tourism market will require sustained efforts to improve the business climate and labor market.

Directors stressed the need to enhance monitoring and supervision of both the bank and nonbank financial sectors, given the much less benign global environment, the heavy exposure of the domestic banking system to the government, and the recent shocks to the insurance and offshore financial sectors. They welcomed the plans to put in place an effective single regulatory unit for the nonbank financial sector. Directors also commended the authorities’ efforts to coordinate with other regional governments to address the regional financial turmoil resulting from the fallout of the collapse of the CL Financial Group.

They generally agreed that the Fund’s emergency assistance for natural disasters will provide valuable support in assisting the authorities with their efforts to mitigate Hurricane Omar’s severe effects on the economy and the balance of payments. While noting the country’s large public debt and inherent vulnerability, Directors were encouraged by the authorities’ exemplary record of debt service on external obligations and their resolve to sustain fiscal consolidation, foster private sector-led growth, and work closely with the Fund in pursuing their reform strategy. In this context, some Directors felt that the Stand-By Arrangement might be a more appropriate instrument.

The Directors encouraged the authorities to develop a full-fledged contingency and crisis preparedness plan, including the identification of emergency fiscal measures. This would allow the government to respond quickly to possible adverse scenarios that may arise against the present background of the difficult financial climate and the country’s high vulnerability to exogenous shocks.