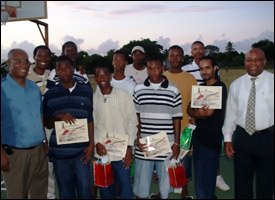 Premier of Nevis, the Hon. Joseph Parry participated in the official closing ceremony of the Basic Electrical Wiring training course which took place on Wednesday at the Cotton Ground Ball field.

The Premier spoke to the young men who graduated and congratulated them on earning their certificates.  “You have made a great career choice.  I hope you young men are able to enjoy working in this area and assist other young men with the knowledge of electrical services,” Mr. Parry said.  “In the coming years, Nevis is going to need a large number of skilled tradesmen and women.  It is our (Nevis Reformation Party) vision to advance the island’s infrastructure.  It would be great for our own local trades people to do their part, to keep our economy growing and our island strong.”

The training program, which ran from May 6th – June 10th was facilitated by Pastor Euclid Lawrence, a native of Cotton Ground village, where the classes were held.

Mr. Lawrence said that as part of the training program, the fundamental electrical course provided an understanding of terminology, basic electrical theory and the responsibilities of working with electricity.

During the ceremony, Deputy Premier and Minister of Social Development, Hon. Hensley Daniel, presented the men with certificates and motivated them by saying that no matter what was in their past, they now have a chance to cut a new road. Mr. Daniel continued his motivation of the young men by stating that people with a trade are independent people, since no one can take that knowledge away from them.

Besides certificates, the participants also received tool kits and other essentials, compliments of TDC and the International Women of Commitment (IWOC) organization.