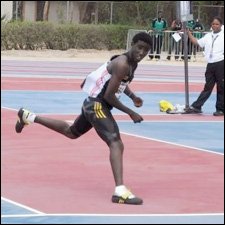 Premier of Nevis, Hon. Joseph Parry congratulated 14 year old Adrian Williams who won gold in the Javelin Under 17 segment of the Carifta Games, recently held in the Cayman Islands.

In a statement to the Department of Information in Nevis, Premier Parry said of Adrian: “We have a great athlete, a great icon, someone who can help to increase Nevis’ image right across the Caribbean in this young man, Mr. Adrian Williams.”

Mr. Williams won the first Carifta Gold for Nevis in seven years when he threw a javelin at a distance of 57.68m.

During an interview discussing how he began javelin throwing, Adrian said he went to a training session and just threw a javelin. Adrian was immediately noticed by head coach of the Gladiators Track Club, Mr. Wakely Daniel, who recognized his talent.

Adrian and his mother, Glennette Williams reside at Butlers Village, St. James Parish.  He is a third form student at the Gingerland Secondary School.