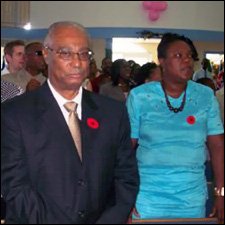 In what could be described as a display of team spirit and a need for prayer, the Premier of Nevis, the Hon. Joseph Parry and staff of the Premier’s Ministry in the Nevis Island Administration congregated at the Eden Browne Church of God for worship on Sunday, November 8th 2009.

The Premier thanked the congregation for welcoming him and his staff and asked the church to pray for his ministry and the island of Nevis during these difficult times.  At the end of his brief remarks, the Premier received a rousing applause from the gathering.

Pastor of the Church, Mr. Davidson Morton lead the congregation in praise and worship and delivered an uplifting sermon which he entitled “Life is not a destination but a journey!”

The church was treated to melodious and inspiring songs from the choir as well as a dance number from the church’s youth dance group.

As part of the Premier’s Ministry’s pledge of togetherness and prayer, they have decided to worship, as a group, once per month at churches attended by various staff members of the Ministry.

1 thought on “Nevis Premeir and His Ministry Worship Together”